Friday, April 28 2017 (some said that it started from the night before), Indonesian netizen surprised when they are visiting Telkomsel website (www.telkomsel.com) the black background appear and there only one image (anonymous logo) and a message with traditional-style words and inappropriate language (in Bahasa Indonesia). The main message is about high price of internet service plan and related  to society development with easy access to internet.

In this case, the hacker only change the home page of the website (deface), not messing with the sensitive data. Typically for this kind of attack there is nothing to worry about the data breach because hacker didn’t touch the core of the system. But still, if someone could change one of the letters on your website that means your website is not secure. 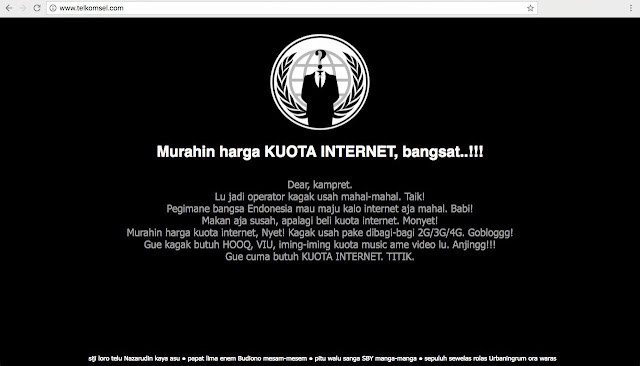 So what the translation?

Here I try to translate the message, I am not sure if it’s the correct words but I believe that the message still the same. If you find the ‘###’ then that’s the negative /inappropriate words that used by the hacker. So what the meaning?

In the headline it’s clear that the hacker pointed on the internet service price that too high for him (or her), is that true? In Indonesia Telkomsel well known as the provider who has good signal strength and available in every province in the country. Sometimes people couldn’t resist to use Telkomsel because it is the only option that they have in their location. That’s why Telkomsel could set the price as they need to (based on their expense and other things).

In this message we can see that the hacker also talking about the human development or growth that related with internet access. Mostly people with the easiest way to access to the internet is the people who always have more information and also update in real time. There will be a different between society who have easy access to internet and not. It’s a good message to think about, not only for Telkomsel but also government.\

Most of provider in Indonesia have some bundle or package of internet data service for example if they offer us 12GB of Internet access (volume based) they always mix the package with 10GB (4G) + 2GB (3G) and it’s common. Telkomsel also did the same thing with mixing their package between 4G and 3G signals. The hacker maybe want it more simple and clear.

Now most of provider offers some extra bonus to its user with free streaming or other things that may interest us such us music streaming (HOOQ) or video that this hacker write down. But this hacker seems not to interested to this bonus or maybe it could be cheaper if they don’t use this kind of services.

Did not enough money to pay the Internet Bill?

Do you believe that this hacker didn’t have enough money to pay his (her) internet bill? We don’t know but with this incident there are some people who support this hacker message, in Twitter this incident goes viral and many reaction it shown by the twitter land citizen some whishing this end soon and some are supporting the hacker message, especially with the price that Telkomsel offers which higher than the other provider in Indonesia.

What will Telkomsel do next?

We can’t control what will happen but we can control our reaction to it. We wondering what will Telkomsel do after this attack, but hoping they decrease their internet price package is something hard especially they always make quality and coverage be their priority. Hope everything okay and they could handle it smoothly.

More Related Articles:
How to Open Telegram Account on PC /Desktop
Be Careful on Websites with These Extensions
How to Easily Record Your Desktop Screen with its Audio!