0 0 2017-11-10T00:30:00+07:00 Edit this post
Here is how to eject / remove safely Flashdisk OTG (On the Go) or media that connected to your Android Smartphone. In PC or computer usually appears the words "removed safely" if the flash disk is connected can be removed from the port. Then how to eject the FD with the correct method from the smartphone? 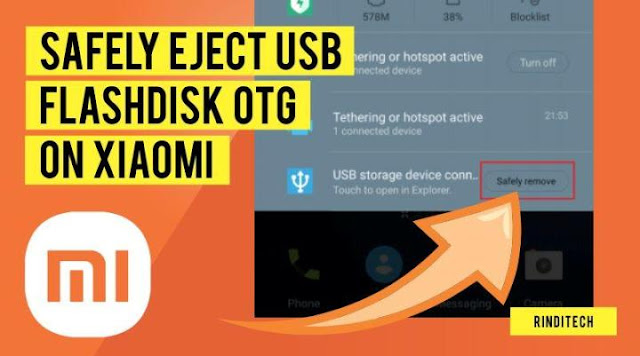 Here is how to eject/remove safely Flashdisk OTG (On the Go) or media that connected to your Android Smartphone. In PC or computer usually appears the words "removed safely" if the flash disk is connected can be removed from the port. Then how to eject the FD with the correct method from the smartphone?

One of the new features or technologies that look very functional in the smartphone is the feature to connect with external storage devices such as connecting flash disk directly to HP, it really helps when we need to copy or transfer some files between our external storage to our smartphone, without using the computer.

Now, just by using OTG USB converter we can connect flashdik with smartphones. In fact, there are some types of flash disk that has 2 pieces of port, 1 USB port commonly used to connect to a computer or laptop, and another Micro USB port that can be directly connected to the micro USB port on the smartphone (which is used to charge the battery).

Are all Smartphones able to be connected to the flash disk (external storage)?

The answer is No. Why? Because it takes the latest technology for a smartphone that can access the data in your flash disk or other storage media.

As time goes by we are confident that in the future all new smartphones product will support the OTG feature. If we are looking on the trend, such as accessing data on flashdiksk and even external hard drive, it is possible that all manufacturers will soon equip all their new smartphones with this USB OTG feature. 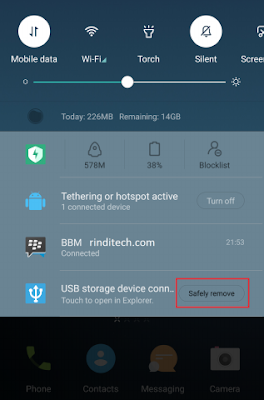 But sometimes and maybe often, after we access the files or folders in the flash disk via the smartphone,  safely remove media (flash disk) in the notification area sometimes gone (disappear). Then how can we unplug the devices safely, without worrying of data loss.

How to Safe Eject / Remove Flashdisk OTG on Android Phone

Here is the safe method to eject or remove flash OTG that being connected with android phone. In this practice we use Xiaomi smartphone which known have a more stringent security system than other android phones. 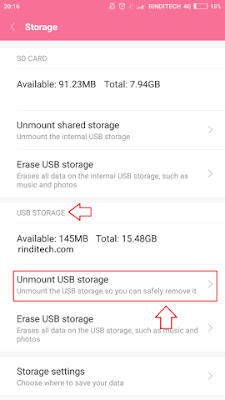 After doing the tutorial above then the data in both media or device is safe to be revoked (unplug) and the data will not be damaged because the process of removing the external storage media (flashdisk) is correct.

We believe that this method is not only for Xiaomi smartphone, for other brands also can try the step by step in this tutorial. It may be slightly different from the writing /menu above but in general, they are similar, the setting to do eject or unmounts is on the storage (storage) section.

Although this feature makes us very easy to transfer files from external storage, we do not recommend you to connect the flash disk to your phone too often because we are afraid the ports in smartphones will scratch quickly or become reduced its performance. Do it when needed, or do a lot of file transfers on a one-time connection.

Is there a problem?

If you guys experience problems or error when doing the tutorial or steps above, please put your question or the suggestion in the comment field below as usual.

Hopefully, this article or tutorial on how to do eject or remove USB flash on Android phones could be a solution and reference for you all. Thanks, keep being a wise user! #beWiseUser!

Other Related Articles about Smartphone:
How to Use Split Screen on Your Xiaomi Phone
How to Make Bold, Italic, Strikethrough on WhatsApp Chat (Even Combination)

Acer,1,Adobe,7,Android,15,Apple,9,Artificial Intelligent,1,ASUS,5,Automotive,29,Biography,2,Blackberry,3,Blogging,4,Design,4,Entertainment,1,Facebook,2,Finance,13,Formula 1,11,Gadget,15,Games,41,Google,4,How to,97,Internet,5,LINE,1,Microsoft,3,News,103,PlayStation,4,Review,31,Samsung,12,Smartphone,17,Social Media,1,Software,11,Sony,5,Sponsored Content,2,TikTok,1,WhatsApp,8,Windows,4,Xiaomi,23,YouTube,15,
ltr
item
ri-Techno: How to Safely Eject /Remove Flashdisk OTG on Android (Xiaomi) Phone
How to Safely Eject /Remove Flashdisk OTG on Android (Xiaomi) Phone
Here is how to eject / remove safely Flashdisk OTG (On the Go) or media that connected to your Android Smartphone. In PC or computer usually appears the words "removed safely" if the flash disk is connected can be removed from the port. Then how to eject the FD with the correct method from the smartphone?
https://1.bp.blogspot.com/-TNML7To3mNM/YNr2fLe3ItI/AAAAAAAAJ-s/j-5Nc0jGseMXpdI4CoMARsbwU80pL4fiQCLcBGAsYHQ/w640-h356/How%2Bto%2BSafely%2BEject%2BRemove%2BFlashdisk%2BOTG%2Bon%2BAndroid%2B%2528Xiaomi%2529%2BPhone%2B3.jpg
https://1.bp.blogspot.com/-TNML7To3mNM/YNr2fLe3ItI/AAAAAAAAJ-s/j-5Nc0jGseMXpdI4CoMARsbwU80pL4fiQCLcBGAsYHQ/s72-w640-c-h356/How%2Bto%2BSafely%2BEject%2BRemove%2BFlashdisk%2BOTG%2Bon%2BAndroid%2B%2528Xiaomi%2529%2BPhone%2B3.jpg
ri-Techno
https://www.ri-techno.com/2017/11/how-to-safely-eject-remove-flashdisk-otg-android-xiaomi-phone.html
https://www.ri-techno.com/
https://www.ri-techno.com/
https://www.ri-techno.com/2017/11/how-to-safely-eject-remove-flashdisk-otg-android-xiaomi-phone.html
true
8051170434734761451
UTF-8
Loaded All Posts Not found any posts VIEW ALL Readmore Reply Cancel reply Delete By Home PAGES POSTS View All RECOMMENDED FOR YOU LABEL ARCHIVE SEARCH ALL POSTS Not found any post match with your request Back Home Sunday Monday Tuesday Wednesday Thursday Friday Saturday Sun Mon Tue Wed Thu Fri Sat January February March April May June July August September October November December Jan Feb Mar Apr May Jun Jul Aug Sep Oct Nov Dec just now 1 minute ago $$1$$ minutes ago 1 hour ago $$1$$ hours ago Yesterday $$1$$ days ago $$1$$ weeks ago more than 5 weeks ago Followers Follow THIS PREMIUM CONTENT IS LOCKED STEP 1: Share to a social network STEP 2: Click the link on your social network Copy All Code Select All Code All codes were copied to your clipboard Can not copy the codes / texts, please press [CTRL]+[C] (or CMD+C with Mac) to copy Table of Content