Jack Ma Retired from Alibaba, this is his successor

Jack Ma Retired from Alibaba. Yup! that's one of the headlines of a technology news website, and in the news, it shows a photo of Jack Ma wearing very artistic clothing on a stage. Yes, Jack Ma sings at his farewell party.

Like it was yesterday that Alibaba was founded, and now the CEO or the highest leader has resigned. But 20 years is not a short time for someone to become a CEO. It seems Jack Ma himself is aware of that.

Also read: How to Calculate Shipping Costs Based on Volume and Weight Size

Precisely located in Hangzhou City, Zhengjiang Province in eastern China. On September 10, 2019, Jack Ma retired from Alibaba with his last position as Chairman or chairman of the board of directors.

That day was not only used to announce Jack Ma's resignation, but also to coincide with Alibaba's 20th birthday celebration. Not only that, on that day also celebrated Jack Ma's 55th birthday.

As in previous years, the founder of Alibaba always gives a special appearance at each of the company's annual retail website events. Like in 2017, Jack Ma danced on stage complete with Michael Jackson costumes and Michael Jackson songs.

At the event, Jack Ma appeared confident by giving his best dance, even though it looked stiff. hehe Starting with the mask of Jack Ma dancing on stage than at the end of the performance, he opened the mask and followed by the cheers of the audience present.

Also read: How to Watch Movie with Subtitle Text Translate on Your Phone

It's been a while since leaving the CEO position

I will step down slowly from Alibaba -Jack Ma

Previously Jack Ma had let go of the CEO position in 2013 and then moved to become chairman of the board of directors (Chairman) on Alibaba. At that time the position of CEO was replaced by Jonathan Lu, who was later replaced by Daniel Zhang in 2015 who was then serving as COO.

So it seems that the resignation as Chairman of Alibaba is no longer surprising, especially since Jack Ma himself has given a statement that he will withdraw from Alibaba slowly.

The reason for Jack Ma's resignation

In some cases, a person can resign from his position because of good and bad reasons. It seems that in the process of resigning Jack Ma was not seen for bad reasons such as company bankruptcy or corruption.

Instead, this came directly from the person of Jack Ma. It seems that Jack Ma doesn't want to be too busy to take care of his business, and wants to start focusing on charity work.

As we know Jack Ma is a former English teacher in China, and it seems that Ma wants to return to teaching as an activity after retiring from Alibaba.

A duet with his successor, Daniel Zhang

At this year's event, Jack Ma no longer danced but instead sang a number of songs, including a duet with his future successor on Alibaba, Daniel Zhang.

Zhang will wait for Ma as Chairman at Alibaba. Zhang also seemed ready to carry on the tradition of making offerings such as singing or dancing on special occasions like this.

At the event, Ma and Zhang appeared very eccentric with costumes that did not lose attention. Jack Ma is seen wearing a dreadlocks wig complete with an electric guitar, while Zhang uses a microphone that has a rather large "D" symbol.

How is Alibaba going forward?

If a company is abandoned by its owner, it is feared that the company will experience a decline in performance, and that is a very reasonable fear.

But it seems that Jack Ma himself has understood this condition, which is why Jack Ma has resigned himself in advance. Not only the announcement in advance, Jack Ma slowly retired from Alibaba, not leaving the company immediately.

Jack Ma seems to want this transition to run smoothly and not disrupt the company's core business. What do you think? Will Alibaba survive after being left by Jack Ma?

Hopefully, this article about Jack Ma retiring from Alibaba is useful! Stay a wise user! #beWiseUser! 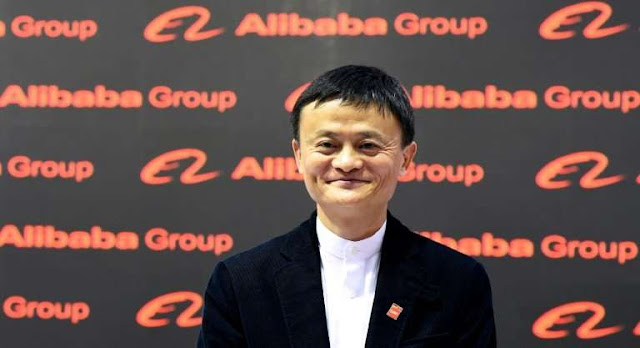 Acer,1,Android,15,Apple,9,ASUS,5,Automotive,10,Biography,2,Blackberry,3,Blogging,4,Design,4,Entertainment,1,Facebook,2,Finance,12,Gadget,15,Games,27,Google,4,How to,83,Internet,4,LINE,1,Microsoft,2,News,82,PlayStation,3,Review,31,Samsung,12,Smartphone,17,Social Media,1,Software,11,Sony,5,Sponsored Content,2,TikTok,1,WhatsApp,8,Windows,2,Xiaomi,23,YouTube,11,
ltr
item
ri-Techno: Jack Ma Retired from Alibaba, this is his successor
Jack Ma Retired from Alibaba, this is his successor
Precisely located in Hangzhou City, Zhengjiang Province in eastern China. On September 10, 2019 Jack Ma retired from Alibaba with his last position as Chairman or chairman of the board of directors.
https://1.bp.blogspot.com/-6zTMdiMwQWk/XaIHqkWUKSI/AAAAAAAAHBs/sohcHezrSXwEJin9xxh9yn-CijHiSMeBgCLcBGAsYHQ/s640/Jack%2BMa%2BRetired%2Bfrom%2BAlibaba%252C%2Bthis%2Bis%2Bhis%2Bsuccessor%2B1.jpg
https://1.bp.blogspot.com/-6zTMdiMwQWk/XaIHqkWUKSI/AAAAAAAAHBs/sohcHezrSXwEJin9xxh9yn-CijHiSMeBgCLcBGAsYHQ/s72-c/Jack%2BMa%2BRetired%2Bfrom%2BAlibaba%252C%2Bthis%2Bis%2Bhis%2Bsuccessor%2B1.jpg
ri-Techno
https://www.ri-techno.com/2019/10/jack-ma-retired-from-alibaba.html
https://www.ri-techno.com/
https://www.ri-techno.com/
https://www.ri-techno.com/2019/10/jack-ma-retired-from-alibaba.html
true
8051170434734761451
UTF-8
Loaded All Posts Not found any posts VIEW ALL Readmore Reply Cancel reply Delete By Home PAGES POSTS View All RECOMMENDED FOR YOU LABEL ARCHIVE SEARCH ALL POSTS Not found any post match with your request Back Home Sunday Monday Tuesday Wednesday Thursday Friday Saturday Sun Mon Tue Wed Thu Fri Sat January February March April May June July August September October November December Jan Feb Mar Apr May Jun Jul Aug Sep Oct Nov Dec just now 1 minute ago $$1$$ minutes ago 1 hour ago $$1$$ hours ago Yesterday $$1$$ days ago $$1$$ weeks ago more than 5 weeks ago Followers Follow THIS PREMIUM CONTENT IS LOCKED STEP 1: Share to a social network STEP 2: Click the link on your social network Copy All Code Select All Code All codes were copied to your clipboard Can not copy the codes / texts, please press [CTRL]+[C] (or CMD+C with Mac) to copy Table of Content