0 0 2019-11-29T01:00:00+07:00 Edit this post
This includes the Tesla Model S Electric Car, developed in conjunction with the Space X rocket project. Elon Musk wants to be a pioneer in electric car makers that can be marketed globally to replace conventional cars that use fossil fuels.
Automotive lovers must know the Tesla Model S and other models, what does it look like? Will the features offered be attractive to consumers in Indonesia? Then what about the price? Is the price of a Tesla electric car cheaper or more expensive than an ordinary car?

So indeed this Tesla electric car has been marketed in our country and imported directly by Prestige Motorcars which indeed has been known as one of the importers of cars with exotic looks from the American continent or European continent.

Then, if we remember that the Tesla electric car was imported directly from America there, then, of course, the price is also very expensive. FYI, for even the cheapest variants we have to be prepared to spend more than 2 billion rupiah.

No wonder that only certain circles of people can afford this Tesla Model S, with the limited number of consumers, this makes this electric car seem more exclusive and classy than other Japanese-made cars.

The work of Elon Musk to Indonesia

Yup! Who does not know Elon Musk, now Elon is known as the founder of the space rocket company, Space X. But the actual work of Elon musk is not only Space X if you have ever used PayPal's financial services, or also Solar Systems, it is also Elon's works Musk

This includes the Tesla Model S Electric Car, developed in conjunction with the Space X rocket project. Elon Musk wants to be a pioneer in electric car makers that can be marketed globally to replace conventional cars that use fossil fuels.

Although the price of this Tesla car is expensive to shortness of breath, but there are features to it. So this Tesla is an electric car that has been predicted as a type of car needed by the future.

Although Tesla is relatively new, because it was only founded in 2003, it turns out that this Tesla is strong and immediately incarnated as a giant company whose jargon wants to always be at the forefront in developing electric car technology.

This Tesla Model S car is present in Indonesia and is a breath of fresh air for automotive enthusiasts in the country. Because this Tesla car has offered a future engine that can use electricity or also use batteries.

Amazingly the type of engine used by the Tesla electric car is always powerful and even its performance is also known to be able to rival the sports car that is equally priced.

Amazingly even at this time, Tesla researchers have developed autopilot technology which later makes the product can run automatically without the need for driver control. 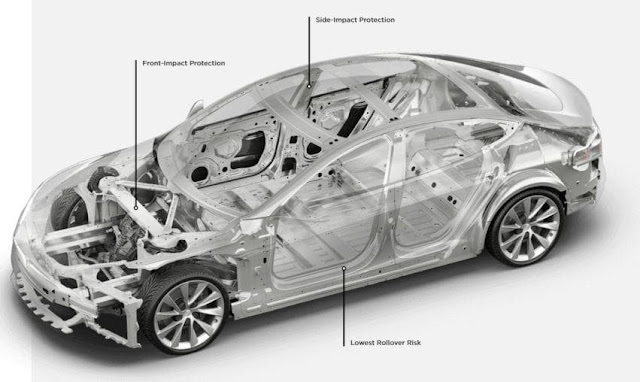 Not only the electric engine without sound, it turns out the Tesla car is also famous for having a very sporty design and also indeed supported by super luxurious interiors and also, of course, a wide variety of advanced technology to be able to pamper anyone who has it.

The Tesla Model S car was first introduced to the general public on March 26, 2009, and this car immediately amazed so many people, this Tesla Model S apparently had the ability to accelerate from 0-100km in 5.5 seconds.

Then for the time to recharge the battery, then reportedly the first generation Tesla Model S is actually able to travel a distance of about 300 km you know.

Does Tesla only provide one variant of the Tesla Model S? Of course not, because there are so many variants on the market in Tesla with different configuration features.

Even those that have recorded only three variants of the Tesla Model S that are starting to be marketed in Indonesia include the 75D, P85D, P60D variants and also the newest is the P100D type.

But do not ever expect if this electric car is priced cheap you know, because the price of the Tesla Type S P100D car in Indonesia reaches Rp. 4.4 Billion OFD (off the road).

Meanwhile, for the Type P 60D it reached Rp. 2.2 billion OFD. How? Interested in buying a Tesla model S?