Why the New Motorola Folding Phone was postponed?

0 0 2019-12-24T20:40:00+07:00 Edit this post
Motorola also said that they could not accommodate changes in significant numbers of interested people like this unless they backed up or delayed the launch date. They also want more consumers to have this Motorola folding phone on the launch date
In 2019 the world of technology will be introduced to smartphones with screens that can be folded. Not only introduced but smartphones - smartphones can already be purchased or at least pre-oder, including this new Motorola folding phone, called Motorola Razr Phone.

Unfortunately, this "nostalgic" cellphone with the latest technology is rumored to delay or reverse the launch date. This is because the interest data they receive is higher than the amount predicted beforehand.

The exact number of enthusiasts and the number predicted by the Motorola is not stated, but with the announcement of this delay, it is certain that the number is very significant.

As explained earlier, the delay in pre-order and release dates is due to Motorola getting a number of enthusiasts who exceeded the previous prediction.

Introduced in November 2019, it seems that this folding screen smartphone attracts many potential buyers. Moreover, some YouTubers also have made a review of this latest smartphone made by Motorola.

"We are working to determine the appropriate quantity and schedule to ensure that more consumers have access to Razr at launch," - Motorola

Motorola also said that they could not accommodate changes in significant numbers of interested people like this unless they backed up or delayed the launch date. They also want more consumers to have this Motorola folding phone on the launch date.

Why the new Motorola folding phone was postponed?

When there is a change in date, generally because there are problems that must be resolved outside the plan, but this time the problem faced is a problem that is 'profitable' for Motorola.

Previously Motorola planned to open pre-orders on December 26, 2019, and will be officially openly sold on January 9, 2020. But after this announcement, it is certain that the pre-order and official release dates will be the same - in 2020.

Then when is this Motorola Folding Phone released?

Until now there is no exact date given by them for the launch of their new Motorola folding phone. However, Motorola said that the delay would not be too far from the date that was planned before.

If the information is like that, I hope this new Motorola folding phone will be launched in the first quarter of 2020.

The competition of folding-screen phones

Huawei and Samsung have first introduced their folding screen phones, which are also expected to be widely purchased in 2020.

But when viewed from the response obtained for all phones with folding screens that exist, the new Motorola folding phone gets a lot of positive responses. Motorola boards also seems to be very confident with the launch of their first folding-screen phone.

What do you think? Hopefully, this information about the release of the new Motorola folding phone (Motorola Razr Phone) is useful. #beWiseUser! 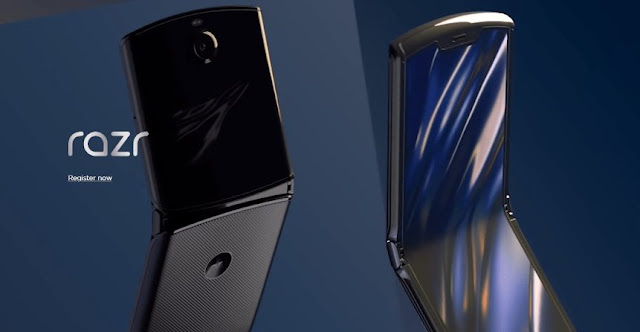 Acer,1,Adobe,7,Android,15,Apple,9,Artificial Intelligent,1,ASUS,5,Automotive,29,Biography,2,Blackberry,3,Blogging,4,Design,4,Entertainment,1,Facebook,2,Finance,13,Formula 1,11,Gadget,15,Games,41,Google,4,How to,97,Internet,5,LINE,1,Microsoft,3,News,103,PlayStation,4,Review,31,Samsung,12,Smartphone,17,Social Media,1,Software,11,Sony,5,Sponsored Content,2,TikTok,1,WhatsApp,8,Windows,4,Xiaomi,23,YouTube,15,
ltr
item
ri-Techno: Why the New Motorola Folding Phone was postponed?
Why the New Motorola Folding Phone was postponed?
Motorola also said that they could not accommodate changes in significant numbers of interested people like this unless they backed up or delayed the launch date. They also want more consumers to have this Motorola folding phone on the launch date
https://1.bp.blogspot.com/-94QBOBjP9kA/XgIUXd_OXgI/AAAAAAAAHoo/loXdVc-9T302kNxw_RqNzqWlnXX_-ewEACLcBGAsYHQ/s640/Whe%2Bthe%2BNew%2BMotorola%2BFolding%2BPhone%2Bwas%2Bpostponed.jpg
https://1.bp.blogspot.com/-94QBOBjP9kA/XgIUXd_OXgI/AAAAAAAAHoo/loXdVc-9T302kNxw_RqNzqWlnXX_-ewEACLcBGAsYHQ/s72-c/Whe%2Bthe%2BNew%2BMotorola%2BFolding%2BPhone%2Bwas%2Bpostponed.jpg
ri-Techno
https://www.ri-techno.com/2019/12/why-the-new-motorola-folding-phone-was-postponed.html
https://www.ri-techno.com/
https://www.ri-techno.com/
https://www.ri-techno.com/2019/12/why-the-new-motorola-folding-phone-was-postponed.html
true
8051170434734761451
UTF-8
Loaded All Posts Not found any posts VIEW ALL Readmore Reply Cancel reply Delete By Home PAGES POSTS View All RECOMMENDED FOR YOU LABEL ARCHIVE SEARCH ALL POSTS Not found any post match with your request Back Home Sunday Monday Tuesday Wednesday Thursday Friday Saturday Sun Mon Tue Wed Thu Fri Sat January February March April May June July August September October November December Jan Feb Mar Apr May Jun Jul Aug Sep Oct Nov Dec just now 1 minute ago $$1$$ minutes ago 1 hour ago $$1$$ hours ago Yesterday $$1$$ days ago $$1$$ weeks ago more than 5 weeks ago Followers Follow THIS PREMIUM CONTENT IS LOCKED STEP 1: Share to a social network STEP 2: Click the link on your social network Copy All Code Select All Code All codes were copied to your clipboard Can not copy the codes / texts, please press [CTRL]+[C] (or CMD+C with Mac) to copy Table of Content