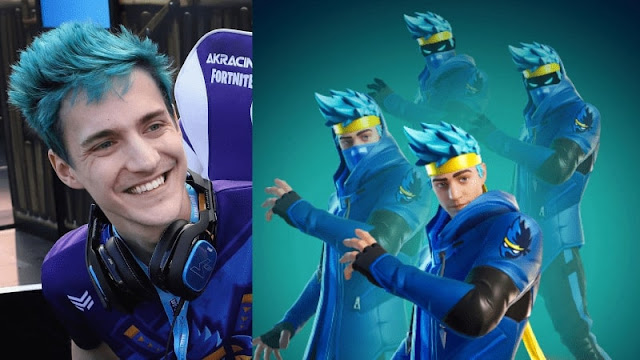 Cool! Ninja skin in Fortnite is Now Available and ready to be used as character choices in the game Fortnite. Gamer named Tyler Blevins or more popularly called "Ninja" now have their own character in Fortnite game.

This was announced directly by Ninja himself when streaming, June 15, 2020. On the streaming, Tyler "Ninja" looks very happy with the appearance of the character (skin) in the game Fortnite.

"It happened. It's official, we finally got a Ninja skin. In the game. In Fortnite. We did it, "-Ninja


For online game players, you are certainly familiar with the game Fortnite, which until now managed to survive in the top game with the most players in the world. Although there are already many competitors, the game Fortnite seems to also continue to grow from time to time.

I've dreamt of having a skin in Fortnite since I started playing the game. Today, my dream becomes reality. Get the Ninja Fortnite Skin in the Epic store Thursday 6 p.m. CST-Sunday 7 p.m. Don't forget to use code NINJA! #NinjaSkin #EpicPartner pic.twitter.com/xTn9UlbkGI
— Ninja (@Ninja) January 15, 2020


Ninja characters or skins in Fortnite are dominated by blue, it looks like these characters have the same blue hair like the current Ninja hair color. In the costume part of the ninja, the character uses a blue jacket with black accents.

In the pants, the ninja skin looks at Fortnite using black pants but still gets a blue accent, just like the color of the shoes he uses. In the accessories, you can see yellow bandana on the Ninja characters in this Fortnite.

There are many variations to choose from such as the use of masks and katanas on the back of the Ninja character in the Fortnite.

In addition, the skin or Ninja characters in this Fortnite get a movement/dance that is typical of ninja gamers. This movement or dance adjusts to the Ninja movement when successfully completing the game in the first position (champion).

Read also: How to Record your Desktop Screen with its Audio

According to information that the Rinditech team got, Fortnite players who want to use the characters or ninja skin on Fortnite must buy this character first. But Ninja did not mention how much it costs to be able to use this character in the game.

In addition to the character Tyler "Ninja" Blevins, Epic Games as the owner of the game Fortnite also informed that the Ninja character is one of the many new characters that will be available in Fortnite games in the future.

Ranging from gamers, musicians, to entertainers may later be more available over time.

Previously, Ninja also made a scene among gamers because he switched media streaming from Twitch to Microsoft's Mixer. In less than a year, Ninja now has a new surprise for its loyal viewers on Mixer.

What do you think? Do you follow every development of this Ninja gamer? Hopefully, this article is useful. Stay a wise user! #beWiseUser!