Samsung Galaxy S20 Plus design leaked! Here are the photos 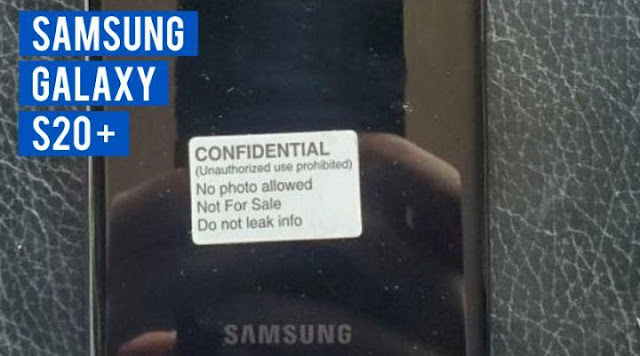 Yup! After the last has issued S10, Samsung should proceed to Samsung Galaxy S11. But the next name turns out to be the Samsung Galaxy S20 Plus (Ultra) whose photos have been leaked to the public.

The upload came from the XDA Developers forum which is already known globally as a website for gathering developers from around the world. This time they get exclusive photos from the final appearance of the design of the Samsung Galaxy S20 which reportedly will be introduced at the Samsung Unpack 2020 event.

Complete with stickers that read "Confidential" photos from the flagship smartphone from Samsung are now scattered on several technology websites. Among others, such as GSMArena, The Verge, Endgadget, Tech Radar, and other technology news sites.


Photos of Samsung Galaxy S20 Plus

Inside the scattered photos of the Samsung Galaxy S20 Plus , there are 4 back cameras complete with flash and microphone holes. The cameras are protected by a rectangular bottom protective glass.

At the front of the camera hole is also still visible on the top of the HP. Samsung still doesn't want to or might not be ready to use behind-the-scenes camera technology as introduced by Xiaomi.

The smartphone that reportedly will be introduced at the Samsung Unpack 2020 event in San Francisco, according to the GSM Arena website will have 12GB of RAM capacity with Qualcomm Snapdragon 865 or Exynos 9830, depending on the location of sales.

What do you think? Are you waiting for this Samsung Galaxy S20 smartphone? or are you interested in other brands? Hopefully this article is useful. Stay a wise user! #beWiseUser!

Acer,1,Android,15,Apple,9,ASUS,5,Automotive,9,Biography,2,Blackberry,3,Blogging,3,Design,1,Entertainment,1,Facebook,2,Finance,9,Gadget,15,Games,21,Google,4,How to,67,Internet,3,LINE,1,Microsoft,2,News,80,PlayStation,3,Review,31,Samsung,12,Smartphone,17,Social Media,1,Software,10,Sony,5,Sponsored Content,1,TikTok,1,WhatsApp,7,Xiaomi,23,YouTube,10,
ltr
item
ri-Techno: Samsung Galaxy S20 Plus design leaked! Here are the photos
Samsung Galaxy S20 Plus design leaked! Here are the photos
Inside the scattered photos of the Samsung Galaxy S20 Plus , there are 4 back cameras complete with flash and microphone holes. The cameras are protected by a rectangular bottom protective glass.
https://1.bp.blogspot.com/-6hcCKwuFRpg/XivuEBhUxGI/AAAAAAAAH3M/b7WzikNm7IwwKbt_aNwjM7YvCIbOzy4YwCLcBGAsYHQ/s640/Desain%2BSamsung%2BGalaxy%2BS20%2BPlus%2BBocor%2521%2BBerikut%2BFoto%2B-%2Bfotonya%2B6.jpg
https://1.bp.blogspot.com/-6hcCKwuFRpg/XivuEBhUxGI/AAAAAAAAH3M/b7WzikNm7IwwKbt_aNwjM7YvCIbOzy4YwCLcBGAsYHQ/s72-c/Desain%2BSamsung%2BGalaxy%2BS20%2BPlus%2BBocor%2521%2BBerikut%2BFoto%2B-%2Bfotonya%2B6.jpg
ri-Techno
https://www.ri-techno.com/2020/01/samsung-galaxy-s20-plus-ultra-design-leaked-photos.html
https://www.ri-techno.com/
https://www.ri-techno.com/
https://www.ri-techno.com/2020/01/samsung-galaxy-s20-plus-ultra-design-leaked-photos.html
true
8051170434734761451
UTF-8
Loaded All Posts Not found any posts VIEW ALL Readmore Reply Cancel reply Delete By Home PAGES POSTS View All RECOMMENDED FOR YOU LABEL ARCHIVE SEARCH ALL POSTS Not found any post match with your request Back Home Sunday Monday Tuesday Wednesday Thursday Friday Saturday Sun Mon Tue Wed Thu Fri Sat January February March April May June July August September October November December Jan Feb Mar Apr May Jun Jul Aug Sep Oct Nov Dec just now 1 minute ago $$1$$ minutes ago 1 hour ago $$1$$ hours ago Yesterday $$1$$ days ago $$1$$ weeks ago more than 5 weeks ago Followers Follow THIS PREMIUM CONTENT IS LOCKED STEP 1: Share to a social network STEP 2: Click the link on your social network Copy All Code Select All Code All codes were copied to your clipboard Can not copy the codes / texts, please press [CTRL]+[C] (or CMD+C with Mac) to copy Table of Content