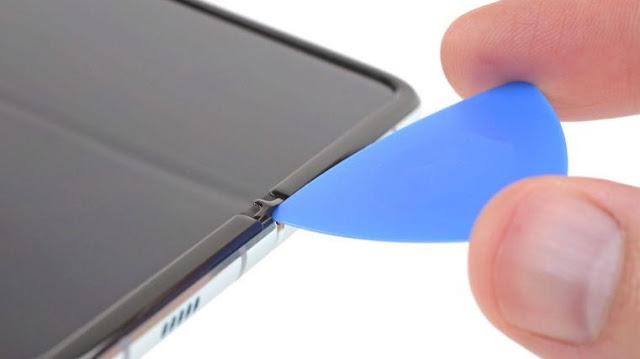 Continuing the most easily repaired electronic product series, this time we will discuss the 3 iFixit versions of the most difficult electronic products to repair. If you think this product or gadget will be easy to fix, then you should know the facts below.

The most difficult electronic product to repair is judged by its ease of removal. And the spare parts are also replaced by ordinary people or owners of these products (consumers), not technicians or 'service workers'.

With the tools that you can buy at various online stores, can we, as users, do our own repairs?


3 of the most difficult electronic products to repair by iFixit

The first electronic product that is the most difficult to repair iFixit version is a smartphone with a folding screen from Samsung. Yup! Samsung Galaxy Fold seems to still have to get special treatment from its users.

It is unlikely that ordinary users like us can easily uninstall and install. Samsung Galaxy Fold gets a 2/10 value from iFixit.

To open the outer casing alone you must be very careful because if carelessly will damage other parts, especially the flexible part or hinges to open and close the screen. Not to mention the other parts that are in it, besides the spare parts are still rare, other parts are also new to the technicians.

But this is very reasonable because the type of smartphone with a folding screen is very new on the market and its distribution is still limited. Hopefully in the future the process of loading and unloading HP folding will be easier, huh.

Value of 10/10 seems that this Apple product will be a nightmare for those of you who want to fix this laptop yourself. It is easy to open the outer casing of this laptop but after opening the case, the real challenge will be seen.

Almost all important parts in this laptop are patented by soldering or gluing together. Only small parts use bolts to remove them, the rest use permanent adhesives such as glue and solder.

If you've seen YouTube content named Louis Rossmann, you've certainly seen how he opens and repairs an iPhone or MacBook. Must use a variety of screwdrivers to open it, as well as other difficulties that can only be done by the technicians.

In the last position there is the latest wireless headset from Apple that is Airpods Pro. iFixit gives a value of 0/10 for ease of loading and attaching this device. This wireless headset is the most difficult product to repair iFixit version.

It is reasonable, because in addition to being difficult to dismantle, this second generation wireless headset is also very difficult to replace. This is because almost all parts of the headset are glued together by very thick glue.

So to unpack you have to damage or remove the glue that is in it, and if you want to put it back together you have to replace the broken glue.

So get ready for those of you who will or have bought a wireless headset from Apple, if it breaks you have to provide money to buy a new one. hehe

The trend has shifted

If you have to go to a service center, you can now do it yourself at home for some light handling or service. Examples such as opening the case, justifying the plugs, replacing spare parts, and several other basic things in repairing your gadget or electronic device.

And with so many repair tools like a special screwdriver smartphone, electronic glue, etc. Now you have an alternative choice if you experience problems with a smartphone or other electronic device.

But it also needs to be measured how good we are at making repairs, if you lack confidence or are afraid of exacerbating damage, it is better to leave it to the experts. Going to a service center or to a local service also doesn't hurt.

Hopefully this article about electronic products that is the most difficult to repair iFixit is useful. If you have a different opinion please save in the comments column. Stay a wise user! #beWiseUser!

Acer,1,Android,15,Apple,9,ASUS,5,Automotive,9,Biography,2,Blackberry,3,Blogging,3,Design,1,Entertainment,1,Facebook,2,Finance,9,Gadget,15,Games,21,Google,4,How to,67,Internet,3,LINE,1,Microsoft,2,News,80,PlayStation,3,Review,31,Samsung,12,Smartphone,17,Social Media,1,Software,10,Sony,5,Sponsored Content,1,TikTok,1,WhatsApp,7,Xiaomi,23,YouTube,10,
ltr
item
ri-Techno: 3 of the most difficult electronic products to repair by iFixit version
3 of the most difficult electronic products to repair by iFixit version
The most difficult electronic product to repair is judged by its ease of removal. And the spare parts are also replaced by ordinary people or owners of these products (consumers), not technicians or 'service workers'.
https://1.bp.blogspot.com/-msppxIun9KQ/Xkz8OXjkxnI/AAAAAAAAH_s/QlixmTtQt78NUriceWYTo3F1_0tjVlYLACLcBGAsYHQ/s640/3%2Bof%2Bthe%2Bmost%2Bdifficult%2Belectronic%2Bproducts%2Bto%2Brepair%2Bby%2BiFixit.jpg
https://1.bp.blogspot.com/-msppxIun9KQ/Xkz8OXjkxnI/AAAAAAAAH_s/QlixmTtQt78NUriceWYTo3F1_0tjVlYLACLcBGAsYHQ/s72-c/3%2Bof%2Bthe%2Bmost%2Bdifficult%2Belectronic%2Bproducts%2Bto%2Brepair%2Bby%2BiFixit.jpg
ri-Techno
https://www.ri-techno.com/2020/02/3-of-most-difficult-electronic-products-to-repair-by-ifixit-version.html
https://www.ri-techno.com/
https://www.ri-techno.com/
https://www.ri-techno.com/2020/02/3-of-most-difficult-electronic-products-to-repair-by-ifixit-version.html
true
8051170434734761451
UTF-8
Loaded All Posts Not found any posts VIEW ALL Readmore Reply Cancel reply Delete By Home PAGES POSTS View All RECOMMENDED FOR YOU LABEL ARCHIVE SEARCH ALL POSTS Not found any post match with your request Back Home Sunday Monday Tuesday Wednesday Thursday Friday Saturday Sun Mon Tue Wed Thu Fri Sat January February March April May June July August September October November December Jan Feb Mar Apr May Jun Jul Aug Sep Oct Nov Dec just now 1 minute ago $$1$$ minutes ago 1 hour ago $$1$$ hours ago Yesterday $$1$$ days ago $$1$$ weeks ago more than 5 weeks ago Followers Follow THIS PREMIUM CONTENT IS LOCKED STEP 1: Share to a social network STEP 2: Click the link on your social network Copy All Code Select All Code All codes were copied to your clipboard Can not copy the codes / texts, please press [CTRL]+[C] (or CMD+C with Mac) to copy Table of Content