Details of Samsung Galaxy Z Flip and competition with Motorola 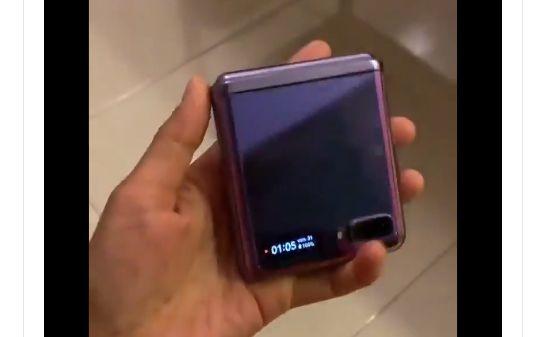 After the era of smartphones emerged, old school mobile phones automatically reduced demand. But flip or folding mobile phones are apparently still in high demand, usually for the use of a second mobile phone (for those who normally use 2 mobile phones). And Samsung also seems to realize this.

Although not yet officially introduced, photos and videos from the Samsung Galaxy Z Flip have been circulating in various online media. Including specifications and also some other details.


Samsung is not alone in this market because there is a Motorola Razr Phone that was first introduced to the public. With the Samsung Galaxy Z Flip, Samsung doesn't seem to want to lose the folding mobile market share, like the old school flip phone models, which turned out to be a lot of enthusiasts.

Galaxy Z Flip will lock in 2 positions, namely at 90 degrees and 180 degrees. For normal use nothing is different, please open the HP 180 degrees or upright. That way you can use it like a smartphone that is common today with a resolution of 1080x2160p.

But you can also use it in a 90 degree position, or like the letter L with the bottom as a stand / stand and the top as a screen. Some applications or cameras will move positions and only use the top screen.

It is not wrong if Samsung is also starting to try again the folding cellphone market, but this time with more advanced technology, namely with folding screens. Motorola has also proven that the market share of folding phones with the shape of a flip is very large in potential, as evidenced by the large number of Motorola Razr Phone smartphone enthusiasts at the time of pre-order.


What do you think? Hopefully this article about the Samsung Galaxy Z Flip is useful. Stay a wise user! #beWiseUser!

Acer,1,Android,15,Apple,9,ASUS,5,Automotive,10,Biography,2,Blackberry,3,Blogging,3,Design,4,Entertainment,1,Facebook,2,Finance,12,Gadget,15,Games,26,Google,4,How to,79,Internet,4,LINE,1,Microsoft,2,News,82,PlayStation,3,Review,31,Samsung,12,Smartphone,17,Social Media,1,Software,11,Sony,5,Sponsored Content,2,TikTok,1,WhatsApp,7,Windows,2,Xiaomi,23,YouTube,10,
ltr
item
ri-Techno: Details of Samsung Galaxy Z Flip and competition with Motorola
Details of Samsung Galaxy Z Flip and competition with Motorola
With the Samsung Galaxy Z Flip, Samsung doesn't seem to want to lose the folding mobile market share, like the old school flip phone models, which turned out to be a lot of enthusiasts. But Samsung is not alone in the market because there is a Motorola Razr Phone that was first introduced to the public.
https://1.bp.blogspot.com/-bJs1iTI9fuc/XoWBFA2wBaI/AAAAAAAAIOk/zDfEJm2U6DExLutyXVXw7qfGfCyi9krbgCLcBGAsYHQ/s640/Details%2Bof%2BSamsung%2BGalaxy%2BZ%2BFlip%2Band%2Bcompetition%2Bwith%2BMotorola.jpg
https://1.bp.blogspot.com/-bJs1iTI9fuc/XoWBFA2wBaI/AAAAAAAAIOk/zDfEJm2U6DExLutyXVXw7qfGfCyi9krbgCLcBGAsYHQ/s72-c/Details%2Bof%2BSamsung%2BGalaxy%2BZ%2BFlip%2Band%2Bcompetition%2Bwith%2BMotorola.jpg
ri-Techno
https://www.ri-techno.com/2020/04/details-of-samsung-galaxy-z-flip-and.html
https://www.ri-techno.com/
https://www.ri-techno.com/
https://www.ri-techno.com/2020/04/details-of-samsung-galaxy-z-flip-and.html
true
8051170434734761451
UTF-8
Loaded All Posts Not found any posts VIEW ALL Readmore Reply Cancel reply Delete By Home PAGES POSTS View All RECOMMENDED FOR YOU LABEL ARCHIVE SEARCH ALL POSTS Not found any post match with your request Back Home Sunday Monday Tuesday Wednesday Thursday Friday Saturday Sun Mon Tue Wed Thu Fri Sat January February March April May June July August September October November December Jan Feb Mar Apr May Jun Jul Aug Sep Oct Nov Dec just now 1 minute ago $$1$$ minutes ago 1 hour ago $$1$$ hours ago Yesterday $$1$$ days ago $$1$$ weeks ago more than 5 weeks ago Followers Follow THIS PREMIUM CONTENT IS LOCKED STEP 1: Share to a social network STEP 2: Click the link on your social network Copy All Code Select All Code All codes were copied to your clipboard Can not copy the codes / texts, please press [CTRL]+[C] (or CMD+C with Mac) to copy Table of Content