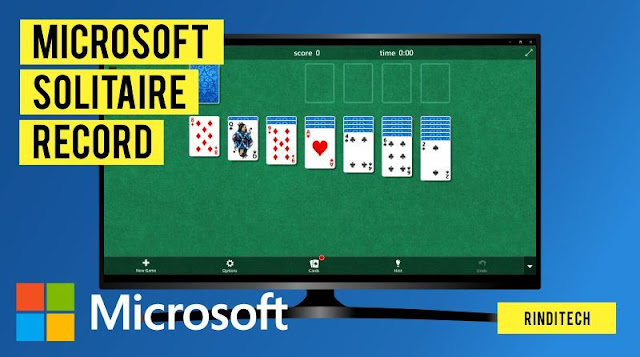 Yup! Now even though it's 30 years old, Microsoft's Solitaire game still has a lot of players. In its report Microsoft claims that this game has 35 Million Active Players every month.

The solitaire game made by Microsoft became one of the games entered into one of the games that are often played in the world. This is not separated from Microsoft's efforts to always add this game in every Windows OS installation file.

Starting from 1990, precisely in Windows 3.0 OS technology, Microsoft began adding this solitaire game in the operating system installation package that they have. Until now not only solitaire games, we will also get other casual games like Chess games that are no less challenging. hehe

According to the information we got, initially this card composing game was made to introduce the mouse function. Mouse functions such as clicks, drag and drop, etc. which are basic functions we still use today.

Previously also, precisely last year (2019) this Solitaire game made by Microsoft entered the World Video Game Hall of Fame. This achievement also shows that the Solitaire game is not just abandoned by Windows users.

Indeed, initially people who installed Windows could not choose whether they wanted to install this Solitaire game or not. Although the users did not ask for this game to be on the Windows OS, it still seems to be liked and it is proven that there are still many who play it.

Are you one of them?

The report of Game Solitaire users made by Microsoft which is still estimated at 35 million per month, shows that this game can still entertain Windows users. How about you? Do you also like to play this card compile game?

I personally am one of the Windows users who sometimes like to play this simple game. Amid the heavy and expensive games today, playing simple and free games like solitaire can still provide relaxation to the mind as well.

Hopefully this article about Solitaire game made by Microsoft is useful. If you have unique information about this game, please save it in the comments field as usual. Stay a wise user! #beWiseUser!

Also read: How to Install Windows Picture Manager on Windows 10