Don't have a last name for your Payoneer account? this is the solution 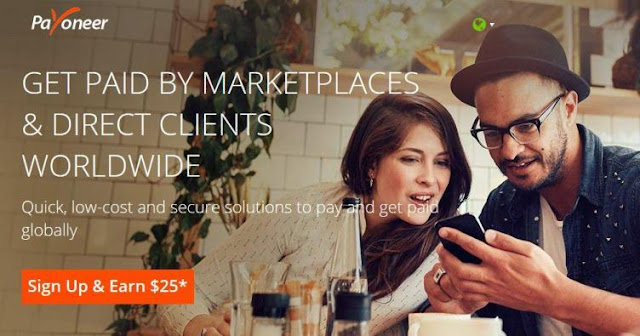 Some time ago someone asked in the video tutorial how to transfer Payoneer balances to a local bank, "I don't have a last name for the Payoneer list, can my name be written twice?". The question about this last name also made me curious, and finally, I found the answer directly from CS Payoneer.

Actually, I wanted to answer that I didn't know because at that time I didn't really know and I was afraid to know if I answered according to my own opinion. Finally, I was browsing - browsing, whether someone abroad also has the same problem.

It turns out that after finding out about the problem of this one name, many also asked, and fortunately this question was also immediately asked in a special forum for the Payoneer community, which also included CS or Payoneer employees who were ready to help or answer questions.

Also read: How to change to local language on all google account

Don't have a last name for your Payoneer account? this is the solution

In a thread or discussion, someone asks about the last name because he doesn't have the last name either. And apparently, looking for answers in English, the questioner came from Indonesia. hehe

Even though this is an old school question, in 2012, the answer seems relevant until now because it seems that there is no option to just use the first name in the registration form or submission form column on Payoneer.

I am Indonesian since I was born, form my parent just give one name to me (without last name). As well as on my ID Card in my country the same case. I really need a Payoneer card to be able to receive commissions from the amazon.com associates program. Help me to be accepted at Payoneer card.

Thanks and Best Regards,

Mr. Yuniantoro above asked for a solution so that his Payoneer card application was immediately accepted because he needed it for commission payments from the program on the Amazon website.

Mr. Yuniarntoro said that from birth he did not have a last name and the KTP was the same, no last name. While on the Payoneer form, we have to enter the last name so that we can continue the submission process.

For anyone with only 1 name (no last name), we generally require that you enter the name into both the First Name and Last Name fields. For example, in your case, "Yuniantoro Yuniantoro."

I see that your application has already been approved, and an e-mail with further details on the US Payment Service has been sent to you. To apply, simply reply to the email with the requested details/documents.

Mr. Yniantoro's question was immediately answered by Nissim, Head of Community from Payoneer, who provided a solution if he didn't have a last name.

Payoneer Community Pages: I Have Not Last Name

Can this solution also be applied on other websites such as Google Adsense or Amazon affiliate? because these websites are almost the same which have a transfer feature between countries and are equally sensitive to differences in information in the account.

For Google Adsense, there are suggestions to write "NOLASTNAME" in the last name column as a sign that we don't have a last name. But this is still a suggestion because in some experiments Adsense users have succeeded in this way.

But this method is not a guarantee because it also depends on the destination bank, whether they will approve the transfer or not with the words "NOLASTNAME" like that.

So the safest way is to first ask the bank where you want to withdraw funds, if they say that it's okay (by writing a NOLASTNAME), then you can use this 'trick'.

Hopefully, this article regarding the last name issue for the Payoneer account is useful. If you have questions, please save them in the comments column below. Remain a wise user! #beWiseUser!

Acer,1,Android,15,Apple,9,ASUS,5,Automotive,9,Biography,2,Blackberry,3,Blogging,3,Design,1,Entertainment,1,Facebook,2,Finance,9,Gadget,15,Games,21,Google,4,How to,67,Internet,3,LINE,1,Microsoft,2,News,80,PlayStation,3,Review,31,Samsung,12,Smartphone,17,Social Media,1,Software,10,Sony,5,Sponsored Content,1,TikTok,1,WhatsApp,7,Xiaomi,23,YouTube,10,
ltr
item
ri-Techno: Don't have a last name for your Payoneer account? this is the solution
Don't have a last name for your Payoneer account? this is the solution
I don't have the last name for Payoneer list, can I write the name twice? by Nissim, Head of Community Payoneer provides a solution
https://1.bp.blogspot.com/-aKD_Yyxl9UY/YCSM7_18P2I/AAAAAAAAJTU/rInrUOEF5AAzGhBc2jOLM45eHNGC83dOgCLcBGAsYHQ/w640-h336/Payoneer.jpg
https://1.bp.blogspot.com/-aKD_Yyxl9UY/YCSM7_18P2I/AAAAAAAAJTU/rInrUOEF5AAzGhBc2jOLM45eHNGC83dOgCLcBGAsYHQ/s72-w640-c-h336/Payoneer.jpg
ri-Techno
https://www.ri-techno.com/2021/02/dont-have-last-name-for-your-payoneer-account-solution.html
https://www.ri-techno.com/
https://www.ri-techno.com/
https://www.ri-techno.com/2021/02/dont-have-last-name-for-your-payoneer-account-solution.html
true
8051170434734761451
UTF-8
Loaded All Posts Not found any posts VIEW ALL Readmore Reply Cancel reply Delete By Home PAGES POSTS View All RECOMMENDED FOR YOU LABEL ARCHIVE SEARCH ALL POSTS Not found any post match with your request Back Home Sunday Monday Tuesday Wednesday Thursday Friday Saturday Sun Mon Tue Wed Thu Fri Sat January February March April May June July August September October November December Jan Feb Mar Apr May Jun Jul Aug Sep Oct Nov Dec just now 1 minute ago $$1$$ minutes ago 1 hour ago $$1$$ hours ago Yesterday $$1$$ days ago $$1$$ weeks ago more than 5 weeks ago Followers Follow THIS PREMIUM CONTENT IS LOCKED STEP 1: Share to a social network STEP 2: Click the link on your social network Copy All Code Select All Code All codes were copied to your clipboard Can not copy the codes / texts, please press [CTRL]+[C] (or CMD+C with Mac) to copy Table of Content