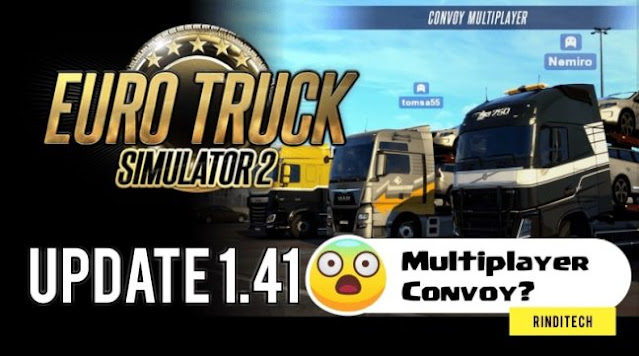 Yup! The 9-year-old Euro Truck Simulator 2 game is still providing fresh updates and has now arrived at ETS 2 1.41 Update. So with this major update, what's new? Is it possible to have multiplayer convoys like American Truck Simulator?

For the last question, the answer is YES!. Now the game Euro Truck Simulator 2 (ETS 2) can do online convoys or multiplayer, without having to use any additional applications. If previously we had to use applications like TruckersMP, now we don't need it anymore.

If in previous updates, ETS 2 only provides an error fix update or a new truck. This time ETS 2 provides many major updates, especially in the features section. Usually, ETS2 updates are only tens of Megabytes or hundreds of megabytes at most, and even then if there are new items such as trucks or new road updates.

But this time the ETS 2 update to 1.41 is huge. The update file size alone reaches 5.8 GB, which means the same size as the install file at the beginning of the purchase. With such a size, there are certainly lots of files that are updated, and also usually many features or systems are changed.

And sure enough, judging by the explanation video from SCS Software (ETS 2 game developer), this update is included in the type of major update, where there will be any changes or additions.

Unlike the ATS (American Truck Simulator) game which does promotions to update the convoy feature, there is even a beta tester version. This ETS game even seems to be quietly in development. I personally know this update after the update file is ready to be downloaded on the Steam application, previously I did not know that SCS Software (ETS 2 game developer) will provide the multiplayer convoy feature in the current update.

For you who buy from STEAM, the update is available and can be downloaded directly. While waiting for the download, please read what features have just been brought. 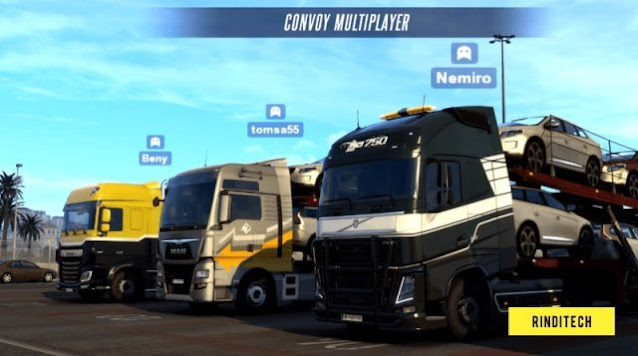 Yup! In its update on Youtube, SCS showcased this latest feature in the first line of several updates brought in version 1.41. Now the Convoy feature is in the main menu after we enter the profile (previously it was only accessible before entering the profile).

The display menu also looks very simple but still informative, if friends also play the Assetto Corsa game and use Content Manager, now it looks almost like the online multiplayer display in the Content Manager application.

On the multiplayer page, we will be given data such as the name of the room, the number of players, and the latency quality of our connection to the server. I think this data is quite helpful, especially since this feature is still new, I am sure that in the future there will be improvements and adjustments.

Also read: How to set Logitech Shifter to 12 Speed on ETS2 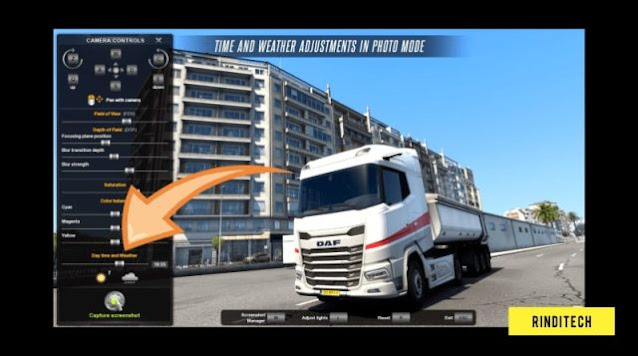 Yup! After we can adjust the camera position and details in Photo mode, now we can also set the time and weather when the photo will be taken. With this feature, we can easily create various themes or situations.

With this feature we no longer need to wait for rain or wait for a golden moment like sunrise or sunset to get good lighting, we just need to press a few buttons in the photo menu and the atmosphere we want will be realized immediately!

Also read: How to Make Camera Transitions Smooth in ETS2

YES! Maybe in earlier versions, if we wanted to move somewhere instantly, we needed to open a code window like CMD and write a standard command like "Go to Amsterdam". Now we don't have to bother writing these codes anymore because ETS2 1.41 is now equipped with the Quick Travel feature.

Quick Travel allows us to move to a location instantly, and this feature can be found on the main menu page. That way we don't have to bother anymore to open the command page and write the standard code.

However, if you use this feature you will be asked for a fee or fee as we do transit by ferry to a different island.

Also read: How to Get a Police Escort for Your Truck in ETS2

The next feature in ETS 1.41 is the addition of the Autoestrada A24 Douro Road in the city of Iberia (DLC), if you have purchased the Iberian city DLC then you will find a new road in the city.

This road is famous for its many vineyards along the way as well as other famous landmarks. This road connects the A7 and A25 roads in the city of Iberia, Portugal.

Finally, SCS Software revealed that there are many new icons in the map section (World Map). Of course, with the addition of this icon, many special locations or places will be easier to find on the map

As for the details, I haven't been able to find the new icons, but if you look at the video uploaded by SCS Software, there are a lot of lists of icons or signs on the map that I just saw.

Hopefully, this article about the ETS 1.41 update is useful. If you have any questions, please save them in the comments column below. Keep being a wise user! #BeWiseUser!