Why Mercedes Team leave Formula E after the 2022 season?

0 0
Just last season the Mercedes team won the championship in the Formula E electric car racing event, but why did Team Mercedes leave Formula E after the 2022 season? This question also seems to surprise several parties, including the founder and CEO of Formula E, Alejandro Agag.

Then, why did the Mercedes team leave Formula E after the 2022 season? From some information, it is known that the reason they left was to focus on Formula 1 racing which seemed contrary to their emission-free vision in the future.

Which is where the 'road jet' race still uses fuel oil (even though it is a hybrid). Alejandro believes that Mercedes wants to enjoy the last days of using fuel before they focus on electric vehicles in 2030.

Why Mercedes Team leave Formula E after the 2022 season?

Then, why did the Mercedes team leave Formula E after the 2022 season? From some information, it is known that the reason they left was to focus on Formula 1 racing which seemed contrary to their emission-free vision in the future.

“In motorsport, Formula E has been a good driver for proving our expertise and establishing our Mercedes-EQ brand, but in the future, we will keep pushing technological progress - especially on the electric drive side - focusing on Formula 1. - Markus Schafer (Mercedes-Benz)

From the statement above, it can be seen that Mercedes seems to be quite satisfied with the performance and results of their team in the Formula E race. The impression just wants to show that they are not only good at fuel-based vehicles, but they are also able to compete in electric vehicle competitions.

When viewed from his vision to sell fully electric vehicles in 2030, this decision looks very contradictory. Moreover, Mercedes-Benz has committed to investing 34 million euros to realize the all-electric road car by 2030.

why does Mercedes keep racing in Formula 1?

Until now, when viewed from the prestige and publications, Formula 1 racing is indeed much better than Formula E. Not to mention, the Formula E series racing is still relatively new when compared to F1 which already has a lot of history and also gave birth to legends of world drivers. .

Although there are no plans to use an electric engine yet, F1 is committed to using 100% recyclable fuel in the future.

“It is the arena where we constantly test our technology in the most intense competition the automotive world has to offer - and the three-pointed star hardly shines brighter anywhere else.

“F1 offers rich potential for technology transfer… and our team and the entire series will achieve net-zero status by the end of the decade.” -Mark Schafer.

Not only doing "Branding", but Mercedes in the formula 1 race also looks very healthy in terms of finances. With so many partnerships with many world sponsors, it seems that continuing to race in F1 is a very realistic option. Especially if you can get a profit so that it doesn't burden Mercedes-Benz's finances globally.

Formula E CEO, Alejandro Agag, believes that Mercedes will most likely return to Formula E racing in 2030, once they are fully electric in their commercial vehicles.

“They want to enjoy the last few years of burning fuel and then maybe in 2030 they will go back to electric racing. Probably earlier." -Alejandro.

Alejandro also considers that Mercedes currently just wants to enjoy the last days of using a fuel-oil-powered engine. He assumed that Mercedes wanted to do the "last dance" with the fuel-based technology.

Hopefully, this information about why the Mercedes team left Formula E after the 2022 season is useful. What do you think? Was the Mercedes EQ team's decision the right one? 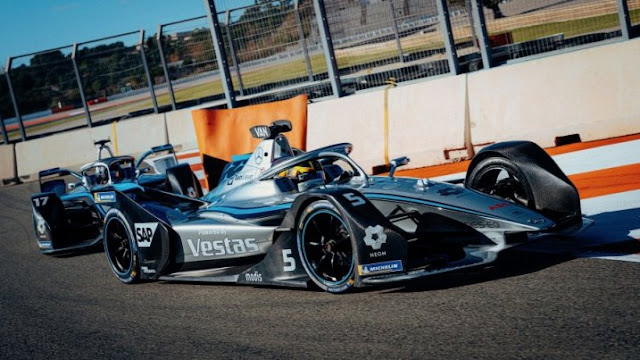 Acer,1,Android,15,Apple,9,ASUS,5,Automotive,9,Biography,2,Blackberry,3,Blogging,3,Design,1,Entertainment,1,Facebook,2,Finance,9,Gadget,15,Games,21,Google,4,How to,67,Internet,3,LINE,1,Microsoft,2,News,80,PlayStation,3,Review,31,Samsung,12,Smartphone,17,Social Media,1,Software,10,Sony,5,Sponsored Content,1,TikTok,1,WhatsApp,7,Xiaomi,23,YouTube,10,
ltr
item
ri-Techno: Why Mercedes Team leave Formula E after the 2022 season?
Why Mercedes Team leave Formula E after the 2022 season?
Then, why did the Mercedes team leave Formula E after the 2022 season? From some information it is known that they want to focus on racing in formula
https://blogger.googleusercontent.com/img/a/AVvXsEjkrHySUoofxhejiIyZ3ILKvn3z8hzdcHeu0uM-rVWf7sjKTvBCuRL5YXSGXWCIa6OI5oq754NlW2nqWQpMv_uoXQFsbETWVTwnwTE46ScUj1L8rul0yvDyRzczq7CisOoA43NM6OHQ36gkyw1N5HarWphkkcl28xPMWoDVd8K1rYTbOSxKstWI2vle=w640-h360
https://blogger.googleusercontent.com/img/a/AVvXsEjkrHySUoofxhejiIyZ3ILKvn3z8hzdcHeu0uM-rVWf7sjKTvBCuRL5YXSGXWCIa6OI5oq754NlW2nqWQpMv_uoXQFsbETWVTwnwTE46ScUj1L8rul0yvDyRzczq7CisOoA43NM6OHQ36gkyw1N5HarWphkkcl28xPMWoDVd8K1rYTbOSxKstWI2vle=s72-w640-c-h360
ri-Techno
https://www.ri-techno.com/2021/12/why-mercedes-team-leave-formula-e-after-the-2022-season.html
https://www.ri-techno.com/
https://www.ri-techno.com/
https://www.ri-techno.com/2021/12/why-mercedes-team-leave-formula-e-after-the-2022-season.html
true
8051170434734761451
UTF-8
Loaded All Posts Not found any posts VIEW ALL Readmore Reply Cancel reply Delete By Home PAGES POSTS View All RECOMMENDED FOR YOU LABEL ARCHIVE SEARCH ALL POSTS Not found any post match with your request Back Home Sunday Monday Tuesday Wednesday Thursday Friday Saturday Sun Mon Tue Wed Thu Fri Sat January February March April May June July August September October November December Jan Feb Mar Apr May Jun Jul Aug Sep Oct Nov Dec just now 1 minute ago $$1$$ minutes ago 1 hour ago $$1$$ hours ago Yesterday $$1$$ days ago $$1$$ weeks ago more than 5 weeks ago Followers Follow THIS PREMIUM CONTENT IS LOCKED STEP 1: Share to a social network STEP 2: Click the link on your social network Copy All Code Select All Code All codes were copied to your clipboard Can not copy the codes / texts, please press [CTRL]+[C] (or CMD+C with Mac) to copy Table of Content