How Much an iRacing Game Prices for Beginners? on the Official Store and Steam 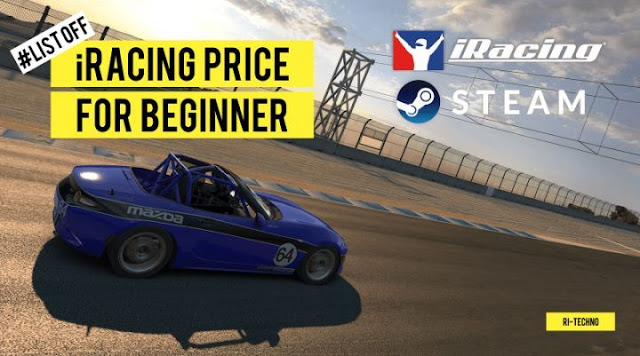 When viewed from the price, this iRacing game is indeed much more expensive when compared to similar racing games. If you have never tried other racing games such as Assetto Corsa Competizione, rFactor 2, etc. then I recommend trying these games because they are cheaper and actually not much different from the racing experience.

The iRacing game is famous for its very large community, so if you want to play online, almost every session there is someone playing so you won't be racing alone. In addition, in iRacing there is a rating or licensing system so we will play with people who are almost one level, or at least there are no more players who play carelessly (dirty drivers).

Subscription means we don't buy a game but buy access to a game with a certain time limit, such as monthly or yearly. Below there are several options, for beginners, please see the price in the New member section (40% discount), after the "new member" validity period expires, the extension follows the normal price.

Prices in the iRacing Official Store

From the price list above, it can be seen that the price offer for the iRacing game on the Steam game is more attractive (cheaper) when compared to the price offered by the official iRacing store. Especially if we compare the normal prices on iRacing and Steam, it's quite far.

If you pay the normal price for 1 month on the iRacing website it costs $13 and on Steam it only costs $7.14, the difference can be more than $5. Not to mention we compare other prices such as 3 months, 1 year, etc.

Also read: How to move Steam Games to Another Drive without Reinstalling

List of Built-in Cars and Circuits (Free) For Beginners

The following is a list of cars that will be obtained from the starter package.

The following is a list of circuits/tracks that will be obtained from the starter package.

From the list above, it looks like a lot, but for general content such as GT3 cars or Formula 1 cars from Mercedes, we have to buy them separately. As with circuits, there are still many international circuits that are not included in the list of free content for beginners.

Also read: List of Free Cars and Tracks in iRacing for Beginners

For additional cars, iRacing costs $11.95 per car. And for the iRacing circuit, one circuit costs $11.95 - $14.95 (depending on the type of circuit). It should be noted that this is the normal price, iRacing offers a discounted price for several purchase conditions, for full details, please open the official iRacing page.

The purchase of this additional content is a one-time fee where we only need to buy it once, and the content will be available forever in our account as long as the account is active with a subscription period.

So if we buy a car in January and our subscription expires in February, the car is still in our account. For example, if we reactivate the subscription period in December, the car purchased in January can still be used.

List of iRacing payment options in the Steam app

Be patient, iRacing always has a discount!

When viewed from the price, this racing game is included in the ranks of the sultan's game where the price of the game is not bought once but is based on a subscription. To my knowledge, no other racing game besides iRacing has subscription-time-based pricing, all one-time purchases.

Therefore, for those of you who are on a budget, make sure you always wait for the discount if you want to make a purchase or subscribe. Generally, there are discounts based on holidays and holidays such as New Year, summer holidays, etc.

Every Steam month there will also be a discount moment, just wait, there will be. Especially if you are just a casual player who only plays it from time to time. Waiting for discounts on buying games is highly recommended.

What If we stop the membership

What if our account or subscription period on iRacing is not renewed? Will the cars and circuits we buy be forfeited? what if it is activated again a year later or so?

Based on information from iRacing, as long as we can log in to our account in the iRacing game, then all purchased cars and circuits will not be lost, all content will remain in our account even though it has not been renewed for a long time.

For example, if our subscription expires in January and we reactivate it in March next year, it doesn't matter, all the cars and circuits we buy will be immediately usable as before.

Also pay attention to the auto-renewal section, if you just want to try the iRacing game first, I suggest disabling the auto-renew feature, in the Auto-Renew Options section.

Hopefully, this information about the price of the iRacing game for beginners is useful. If you have any questions, please save them in the comments column as usual. Keep being a wise user! #beWiseUser!