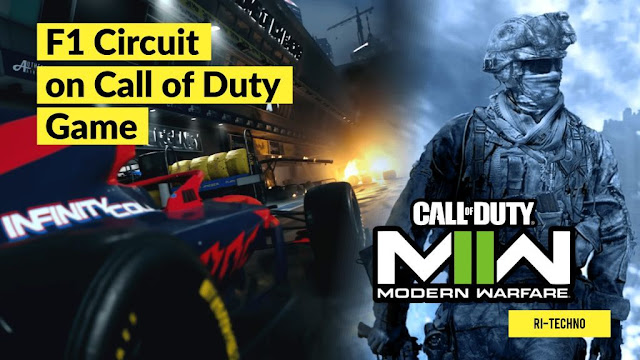 Yup! Call of Duty Game Changed the Marina Bay Street Circuit F1 Circuit, the venue for the Singapore GP, into one of the maps that can be chosen to become a battle area or war between players. This collaboration was announced on August 8, 2022, by the social media account Call of Duty (@callofduty).

In the style of Oscar Piastri's announcement that he refused to become an Alpine racer, Infinity Ward, as the developer of the CoD game, announced that they would make the Marina Bay circuit one of the maps to choose from in the game Call of Duty: Modern Warfare 2 (MWII).

With the increasing popularity of Formula 1 through the Netflix film series, Drive to Survive, now all aspects of Formula 1 seem to be easier to sell. Several drivers have also appeared on various talk shows such as The Ellen Show, Daily Show with Trevor Noah, The Late Late Show with James Corden, Vanity Fair, GQ Sports, LADbible, etc.'

Maybe this is one of the collaborations that was never thought of before, a war game collaborating with one of the racing circuits. Generally, war games choose places such as forests, buildings, or other public places, but this time they chose a racing street circuit to be used as a place to compete for skills in FPS games.

It is planned that the COD MWII game will be released on October 28 this year on all consoles such as PlayStation, XBOX, and PC. But you can play it early, if you pre-order, you can try this Marina Bay circuit map in Singapore on 16-17 September 2022.

The Singapore GP racing event itself will be held on October 2, 2022, and judging from the timing of the game's release, it has nothing to do with the Singapore GP F1 race in "real life".

In the video, one of the iconic landmarks in the Marina Bay circuit area is seen, namely a large windmill. In addition, there were also several Formula cars parked and some were driving. In addition, a safety car was also seen parked in the garage.

No official collaboration between COD and Formula 1?

In the teaser video or trailer uploaded by COD, it shows various things that exist in an F1 race, but there is not a single banner or official logo from Formula 1 or from teams that officially participate in the Formula 1 championship.

Although there is a formula car (open wheel) with car number 48, the brand or brand of the team is different from the original, all garages or pit stops are filled with artificial brands. Thus, it is clear that COD does not have an official partnership with Formula 1, this project is seen as an "inspired" project from one of the circuits that are used as Formula 1 races.

What appears to be related to real life is a neon box with the words Marina Bay written on it, at the beginning of the trailer there is a large inscription "MARINA BAY GRAND PRIX". "Marina Bay" is indeed the name of the circuit, but the name of the GP itself is not the Marina Bay Grand Prix, but the Singapore Grand Prix.

Also read: Mattia Binotto: Nothing to Change at Ferrari

No confirmation from Formula 1

Until this news was made, from the Formula 1 side there was no announcement or information regarding this project. There are no posts on all social media and on the official F1 website about the use of the Marina Bay circuit in the COD game. So most likely, there will be no cooperation or relationship between F1 and COD game developers.

Even if it is true that there is no official collaboration, I am personally very happy with the steps taken by COD because then racing sports, especially Formula 1, will certainly get more attention from more people.

What do you think? Should this collaboration be formalized, or is it appropriate like this? Hopefully, this information about the Call of Duty game that turned the F1 circuit into an area of ​​war is useful. If you have any questions, please save them in the comments column below as usual. Keep being a wise user! #beWiseUser!