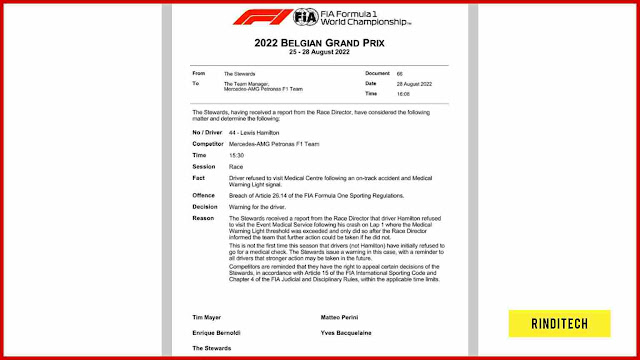 The FIA (Fédération Internationale de l'Automobile) for Formula 1 issued a warning letter to Lewis Hamilton because he refused to have a medical check-up after the incident with Fernando Alonso at the Belgian Grand Prix.

After getting unsatisfactory qualifying results, Lewis Hamilton is very fiery - fire to get maximum results in the Belgian GP race. Likewise, Fernando Alonso was very excited to chase the podium after successfully locking P3 on the start grid.

Unfortunately, both drivers had an incident on the first lap, especially at Turn 5, the car driven by Lewis Hamilton and Fernando Alonso had contact and made Hamilton's car lift and drift at any time.

Luckily both drivers are fine, although Lewis Hamilton had to finish the race early because there was a leak in his car. Fernando Alonso got a much better result, Alonso managed to finish in 6th place and move up to 5th after Charles Leclerc got a 5-second penalty for "speeding" in the pit lane.

Although physically fine, according to regulations, Lewis Hamilton is required to visit a health center for an examination. However, as explained in the warning letter, Hamilton reportedly refused to come to the health center.

In the warning letter, it is explained that all medical indicator signals have met the requirements during the incident on the first lap, which means that the racer is required to conduct an examination at the medical "post" (Event Medical Service). But Lewis Hamilton did not want to come to check himself at the medical post that had been provided.

The Stewards received a report from the Race Director that driver Hamilton refused to visit the Event Medical Service following his crash on Lap 1 where the Medical Warning Light threshold was exceeded and only did so after the Race Director informed the team that further action could be taken if he did not.

FIA: This is not the first time

Based on the letter issued by the FIA it was stated that this was not the first time a worker refused to have a medical checkup after an incident, it seems that the drivers (who refused) thought it was not too important and felt fine.

Judging from the current level of safety for Formula 1 cars, there's simply nothing to worry about if a driver experiences a simple incident during a race. television fatal accidents such as Romain Grosjean in Bahrain, Max Verstappen, and Guanyu Zhou in Silverstone, of course, require further medical treatment.

But the rules are still the rules, and if anyone breaks they must be punished. However, so far, the sentence is limited to a warning letter.

This is not the first time this season that drivers (not Hamilton) have initially refused to go for a medical check. The stewards issue a warning in this case, with a reminder toall drivers that stronger action may be taken in the future.

The FIA will apply a more severe penalty if a driver refuses again, but I don't think the penalty will affect the race, in my mind right now there is only a fine as usual. haha

Also read: Max Verstappen Ready to Return to Netflix: Drive to Survive, here are his demands