Mattia Binotto: Nothing to Change at Ferrari 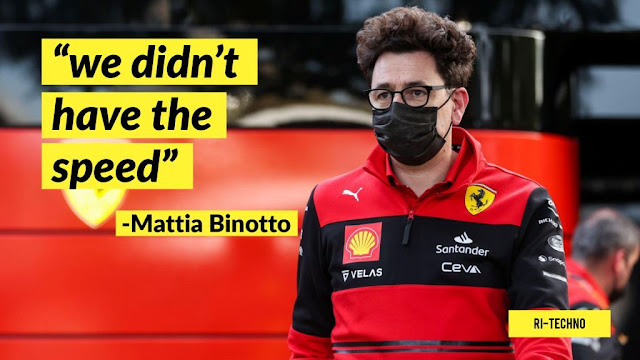 The Ferrari team in F1 this year may be one of the "hot topics" that continues to be a conversation. After successfully taking full points in the opening race in Bahrain, Ferrari seems to be back to their original settings, yes, there are always factors that prevent them from taking full points.

Also read: More consistent than Ricciardo, Lando Norris: MCL36 Not what I want

Mattia Binotto: Nothing to Change at Ferrari

Despite the many criticisms of the strategy taken by Ferrari, the Ferrari boss emphasized that in Hungary the Ferrari team only lost faster than the Red Bull and Mercedes teams. After being criticized for choosing Hard tires for Charles Leclerc during the second pit, Mattia seems to be trying not to blame it on the Ferrari team, but on the car's ability.

“we didn’t have the speed (in Hungary),” - Mattia Binotto

The strategy team for Ferrari's main challenger in F1, Red Bull, has another opinion about the "blunder" of Ferrari choosing Hard tires while in Hungary, Red Bull's strategy team, Hannah Schmitz, argues that in Hungary Ferrari was just unlucky.

Hannah explained, that Red Bull also had an alternative strategy by using hard tires but at that time according to Red Bull Hard tires were not suitable because the weather was too cold and too risky. But it looks like the Ferrari team has a different opinion about Hard tires.

Not only strategy, but Driver Error also contribute to points deficit for Ferrari

In addition to choosing a strategy that sometimes raises many questions, the Ferrari team also sometimes loses points due to driver error or driver error.

The most memorable is when at the French GP, when Charles Leclerc was comfortably leading the race he misplaced the car so that the car lost its balance and hit the parapet.

In that race, Leclerc had to finish the race early (DNF). At that time Leclerc was leading the race and automatically lost 25 points (the number of points for first place).

Currently, the Scuderia Ferrari team is 97 points behind the Red Bull team who are at the top of the team standings. The difference in points is considered quite large because often Ferrari loses a lot of points when they are leading the race.

Hopefully, this discussion about the Ferrari team believing they don't need changes for the second half of the season is useful. What is your opinion? Keep being a wise user! #beWiseUser!