More consistent than Ricciardo, Lando Norris: MCL36 Not what I want 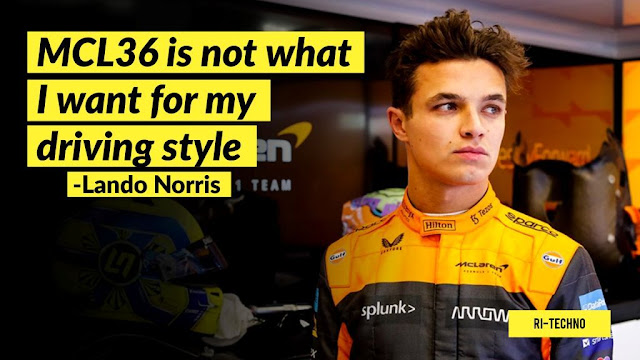 The McLaren F1 team may be one of the teams whose performance is disappointing, how not, after finishing in 3rd position in constructors, the McLaren F1 team seems to have difficulty competing in the middle board. However, as an individual driver, Lando Norris is still the rising star among the drivers.

Currently, during the summer break, Lando Norris is in 7th place in the driver's championship. It's not a top 3 or even a top 5 driver in the standings, but with 7th position, Lando leads the other drivers outside the top 3 teams (Red Bull, Ferrari, and Mercedes).

In stark contrast to Daniel Ricciardo, Lando's teammate at McLaren, Lando Norris currently has a total of 76 points, while Daniel currently only has 19 points and is in 12th place in the drivers' standings.

“I don’t think you can probably in any way say the car is made around me,” -Lando Norris

The current discrepancy in race results has led to speculation that the MCL36 (Mclaren's car for the 2022 F1 race) was made to suit Lando Norris' racing style, not Daniel Ricciardo's. This makes sense at first glance because the results obtained by the two drivers are very different.

Some time ago Lando responded that he was actually having trouble racing with McLaren cars at this time, not just Daniel. But Lando added that he was still trying to adapt even though the MCL36 was very uncomfortable to drive.

From what I want from the car, it’s like the opposite of what it’s giving me at the minute! I would say the car I have now is completely not what I want for my driving style and very unsuited for me. -Lando Norris

Lando also continued that this does not mean that this kind of thing automatically gives bad results, he believes that now what is needed is to adapt to the car even though it is very uncomfortable. This adaptation process also made him stay in the top ten of the Formula 1 drivers' standings.

“It’s not a bad thing, it’s just that’s what it is and you have to adapt to it. That’s why I feel like I’ve done a reasonable job this year, adapting to something that isn’t quite what I want or like. -Lando Norris

Is Daniel Ricciardo not adapting quickly?

"Adaptation" may be the key to Lando Norris' success in "taming" the current MCL36. Not only this year, but it seems Lando also has the same approach, which is quickly adapting to previous McLaren cars.

So until now Lando can get more consistent results than his teammates at McLaren. With the same car, generally, the results of teammates are not much different, but there seems to be a stark difference between Daniel Ricciardo and Lando Norris.

Regarding Daniel Ricciardo's unsatisfactory performance, Lando Norris has his own opinion.

Sometimes that’s a bit different from what Daniel has. But in general, we are still aligned as a package with what we need to improve on. -Lando Norris

I’m giving my opinion and saying what I feel like will help me go quicker in the car, Definitely (I’m having) a bit more of a voice. Sounding my opinion and talking about it a little bit, whether I lose every opinion I have, I don’t care. Just speaking up a little bit more and being confident in that stuff is always a good thing. -Lando Norris

Also read: Max Verstappen Ready to Return to Netflix: Drive to Survive, here are his demands