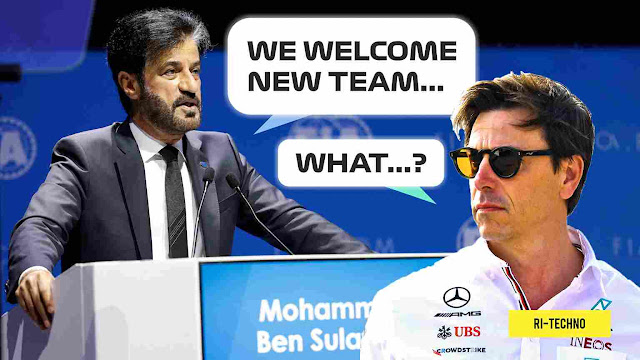 Recently, FIA President Muhammed Ben Sulayem hinted that there would be a new team participating in Formula 1 racing. Although not yet official and still in the verification stage, it is believed that the team is from America, Andretti Global, who has joined General Motors' Cadillac luxury brand.

Although the FIA boss welcomes this plan, it seems that some parties in F1 still cannot accept it 100% positively. Even the CEO of F1, Stefano Domenicali, didn't look too enthusiastic when asked about adding a new team to F1.

Previously, the boss of the FIA President, Muhammed Ben Sulayem, gave a statement that there would be a new team in the Formula 1 race. Although it is still in the inspection stage, it is very likely that the new team will be approved.

It's no secret that Andretti Global has shown interest in joining the famous pole race on the European continent. Previously it was even reported that Andretti had tried to acquire the HAAS team but was unsuccessful.

Last year, Mario Andretti said that he had tried repeatedly to make the acquisition of the American F1 team HAAS F1 Team so that it could become his own. However, it seems that HAAS is not interested in selling its team to the same company from America.

The FIA welcomes Andretti to F1 with open arms

As we know, from several statements issued by the president of the FIA, it seems that the FIA does not see any problems regarding Andretti-Cadillac's plans to join the 11th team in Formula 1.

Even the president of the FIA, Muhammed Ben Sulayem, said that F1 could still add 2 new teams (a total of 12 teams) if needed and if anyone wanted. This opinion seems to be in line with F1 fans in general, the more cars on the circuit, the more interesting to watch.

Formula 1 has a different opinion

Formula 1 CEO, Stefano Domenicali, believes that more teams do not guarantee more interesting races. At least in terms of quality, Stefano wants to make sure the new team can compete and what is certain is that it must be able to raise the prestige of F1 even better.

Stefano also said that he felt that currently Formula 1 did not really need a new team and did not want to rush to add a new team. If the prospective new team can provide added value to Formula 1 then they will consider it.

According to the GPBlog report, currently, there are only two teams that will openly welcome a new team if there is one, the two teams are McLaren and Alpine. Apart from these two teams, no one else has publicly supported the existence of a new team.

In line with the F1 boss, Mercedes-AMG F1 team principal, Toto Wolff, said that the addition of a new team could make Formula 1's prestige even lower. Toto wants the new team to really bring benefits to all parties involved in Formula 1.

Toto Wolff alluded to the distribution of funds from race prizes in F1. Toto said that previously we had to share prizes among 10 teams, now the percentage will surely be reduced because there will be additional new teams.

The more cars on the track, the more it is interesting!

As a viewer, I'm sure most of you will agree that the more cars on the circuit the more interesting the race will be. But it seems that for some people in Formula 1 it's not that easy.

What do you think? Is the reason from the bosses of F1 acceptable? Or are they just afraid of losing to the new team?