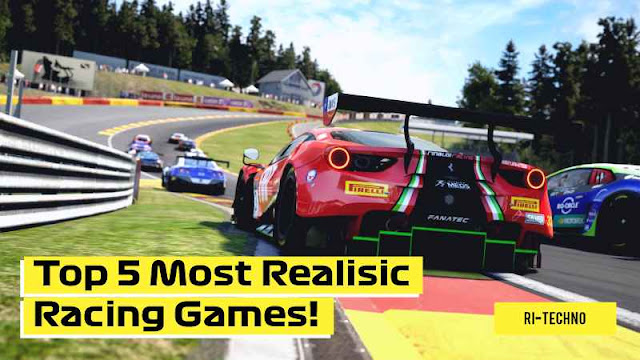 Here is a list of the most realistic racing games for PC. This list is collected from various opinions of racers, especially drivers who have experienced virtual racing with simulators and real-world racing experiences. Spoiler, Grand Turismo is not on the list!

The games on the list are racing simulator games that are currently widely used in the world of sim racing. Because there are words like sim racing, playing this game is also highly recommended using a game simulator such as a steering wheel, it will feel more realistic if you use a shifter, handbrake, etc.

The rating is measured based on the following indicators

Also read: How to Move Steam Games to Another Drive Without Reinstalling

In the world of racing games or sim racing, almost everyone has experienced or at least knows the game iRacing. Even though this game has been released since 2008, the fact is that this game is still competitive and remains at the very top for the most realistic racing simulation game.

If you search for the keyword "the best sim racing game" on YouTube, then the iRacing game is sure to always be in the top 3 list. Whether it's from virtual racers or real racers, they always place iRacing in their top 3 list.

iRacing is famous for the quality of its physics which can be converted into FFB (Force Feedback) on the steering wheel which is close to the real world. A good FFB can help racers better understand the characteristics of each car in every situation.

Also read: How Much iRacing Game Prices for Beginners?

Many of the well-known car brands also make digital versions of racing cars in this iRacing game such as Mercedes, BMW, etc. Mercedes began working with iRacing to create a fully digital version of the Formula 1 cars, W12 and W13 with the same specifications and characteristics as the original car.

BMW has also collaborated with iRacing to create the BMW M Hybrid V8 LMDh (Le Mans Daytona hybrid) racing car which will take part in various international races such as IMSA and the 24 Hours of Daytona.

And there are many other racing cars that are available and have licenses from official brands. In addition to cars with original licenses, the available circuits or tracks are also of laser-scanned quality, which means they have the same detailed quality as the original.

Apart from having to pay a subscription fee, some of the content available must also be 'purchased' such as circuits and various types of racing cars.

This is one of my favorite racing games, besides feeling very realistic when played, this game is also a racing game that has very good visualization (graphics), perhaps the best among all the racing games on this list.

Even though iRacing is in the first place, if we narrow it down to the GT3 and GT4 types, then the Assetto Corsa Competizione game is arguably better.

Game ACC (Assetto Corsa Competizione) is the successor to the sim racing game Assetto Corsa (AC), although, in terms of name, it is almost the same the ACC game is claimed to be a game that uses the latest game engine which is much better than the previous game (AC).

I personally like rFactor 2 because when driving a car in this game I can really feel the car tires touching the road. It's a bit difficult to describe, but if you try it yourself (with the steering wheel of course), then you will understand what I mean.

But it looks like the developers of rFactor 2 will have to emulate what ACC games are doing in terms of development. Game rFactor 2 is very worthy to be included in the list of the most realistic games, but it seems that it is still inferior to the ACC game.

In the world of sim racing or virtual racing, the name Assetto Corsa has become a legendary game and a must-have game for every racing game fan. Besides the price is already very cheap, this game still has a lot of fans.

Even though this game is very old, in terms of FFB (Force Feedback) this AC game can still be relied upon and can still be enjoyed by various groups. Even for new types of racing cars, it's still good to bring in this old-school game.

Even though the developer (Kunos) has not provided new content, many third-party developers continue to produce new content (cars, circuits, etc.) for this game.

Personally, I only played this game for a while because I didn't feel comfortable with the FFB, maybe some adjustments need to be made first so that the game is more comfortable. But among other YouTubers like Jimmy Broadbent, this game is on the list of realistic racing games.

Just like the rFactor 2 game, this Automobilista game seems to have lost popularity to new racing games or big racing games like iRacing. The amount of content is limited and it seems that the game's developers have to focus on their newest game, Automobilista 2.

Even so, from a realistic perspective, this game is one of the most realistic games in terms of FFB.

The Beam NG game is famous for its very realistic physics, especially when used for accident or collision simulations, the results are very close to the real world. But from the other side, Beam NG seems to be lagging behind.

Also read: How to Install Mod in BeamNG Game Automatic and Manual

I personally think the beam NG game is very comfortable to use for casual games such as driving a public car (road car) or exploring forests and deserts using a trail car. But for racing, it seems that it still needs improvement.

Improvements and additions to racing car content in Beam NG have started to appear, hopefully, in the future, it can compete like the Assetto Corsa game.

Because here we are going to pursue the "realistic" side, I highly recommend you to play the above games using the Steering Wheel which has the FFB (Force Feedback) feature. That way, you can feel all the potential that exists in the game.

FFB or Force Feedback can give us the sensation of driving, not just vibrations like in the controller. With FFB, we can feel when the car is understeer or oversteer, or when the car is hit, we can feel the source of contact, whether it is from the left/right, front/back, etc.

Games like Grand Turismo, Forza Horizon, F1 22, etc. do have a lot of fans and the overall game quality is also very good. I also often enjoy playing F1 22 games. However, if you look at the realistic side, these games are still "too good" in terms of force feedback.

If we add the list to the top 10 it looks like these games will be on the list, but because the position is only 5 spots, the standard must be high, right?

For example, Forza Horizon 5 game, looks very stunning and if there is a visual or graphics contest, I'm sure the Forza Horizon game will always be in the top 3. However, when viewed from the side of Force Feedback and being realistic, many sim racers categorize this game as an arcade game or sim-cade or simulator-arcade (not a pure simulator).

The force feedback provided is not very detailed, such as moving the asphalt road to the muddy road is not felt on the steering wheel, or when the car makes contact or flies, the physics calculation is not accurate. And other examples that make this game not included in the list of the most realistic racing games.

The advantage of games that are not pure simulators is that they can still be played comfortably even when using a controller such as a PS4 stick or XBOX stick. There are even those that are still comfortable playing using the keyboard.

So if you just want to de-stress or play for a while, these controller-friendly sim-cade games or racing games are highly recommended. It's different when using a steering wheel, we have to prepare it first and that can take time.