What is and How to Use Second Space in Xiaomi Smartphone

What is Second space in Xiaomi Smartphone?

If there is a Second space means there should be it’s First space, isn’t it? 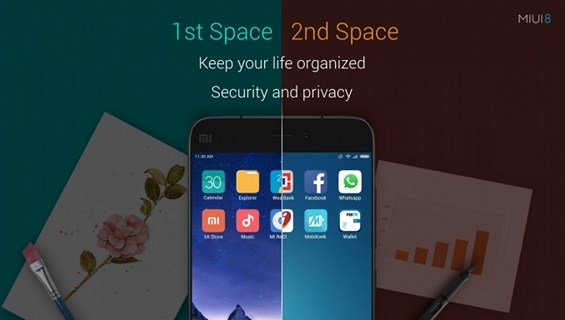 How Second Space Feature Working in Our Xiaomi Smartphone?

Before you can use the second feature of this space we have to activate it first (the way will be described below). This feature will create a new system, separate early this system will look like a set of new mobile phone without changing / influencing the setting in the previous system (First Space).

We can move from space 1 to space 2 at any time, without having to restart the phone. Simply by entering the password / pattern-lock then we've been able to move between them.

How to enable and use the features of Second space 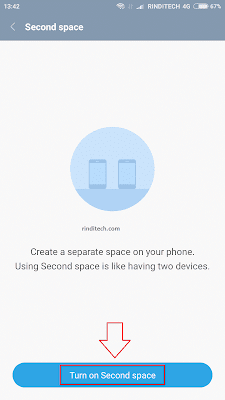 Once you activate the second feature space then you should do some arrangements about the use of the second space.

Go to section >Manage >Set and you will be asked to make some setting and arrangements about the usage of Second space.

Or it can be accessed from the settings section.
Go to >Settings >Second space >Set 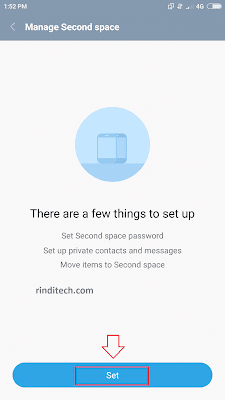 Choose your >Set Second space password to add a password if you want access to the area Second space. You will be prompted to enter a new 4 digit PIN to lock the Second space.

Or you can select >Not now to skip this step, which means do not use a password when moving from the first to the second space pace. 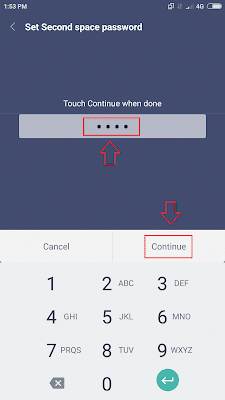 Select >Import when you want to take photos that are in First space to Second space.

Same thing with Import photos, Choose >Import when you want to retrieve data / files from First to Second space. Or, select >Next if you do not want to import any files.

Also with the application, you can select >Import if you want to take some application from First to Second space. Or, >Next if want to install it independently.

Done !. Select >OK on the screen when you set some of the above settings. 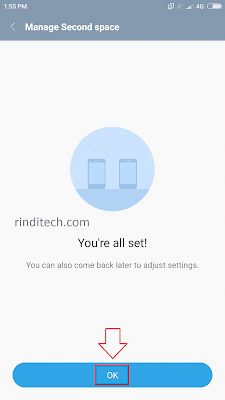 Congratulations! Now you have 'new phone' in your Xiaomi smartphone. For the rest you can explore by yourself about things to do in Second space feature. For applications you can do the installation directly from PlayStore or install manually from apk file that has been downloaded.

What if I want to delete Second space?

If you want to delete second space just simply follow the step on the article 'How to Delete Second space in XIaomi Smartphone' link available at the Related articles list.

If you guys find some problem or want to asked something about second space feature setting and usage, wrote your questions or whatever in the comments below, we will try to help as much as possible. Do not forget to be wise users. #beWiseUser!

Related Articles:
How to Set Your Xiaomi Smartphone as Remote TV
How to Change Distributor ROM to Global in Xiaomi Redmi Note 3 Pro
How to Create  Direct Shortcut to Open Chat with Specific Contact on WhatsApp
How to Delete Second space in Xiaomi Smartphone
How to Watch Movie with Subtitle Text Translate on Your Phone
How to Safely Eject/Remove Flashdisk OTG on Android Phone

Acer,1,Adobe,7,Android,15,Apple,9,Artificial Intelligent,1,ASUS,5,Automotive,29,Biography,2,Blackberry,3,Blogging,4,Design,4,Entertainment,1,Facebook,2,Finance,13,Formula 1,11,Gadget,15,Games,41,Google,4,How to,97,Internet,5,LINE,1,Microsoft,3,News,103,PlayStation,4,Review,31,Samsung,12,Smartphone,17,Social Media,1,Software,11,Sony,5,Sponsored Content,2,TikTok,1,WhatsApp,8,Windows,4,Xiaomi,23,YouTube,15,
ltr
item
ri-Techno: What is and How to Use Second Space in Xiaomi Smartphone
What is and How to Use Second Space in Xiaomi Smartphone
How second space feature work? Then how to activate and use the features of Second space in its special Xiaomi smartphone in MIUI
https://3.bp.blogspot.com/-Q1rX8gECC_I/WCwL9-kxmvI/AAAAAAAACiM/dss2cX5nbNMyH6jxK6p-NjuMtrkF_KXtQCLcB/s640/MIUI-8-Second-Space.jpg
https://3.bp.blogspot.com/-Q1rX8gECC_I/WCwL9-kxmvI/AAAAAAAACiM/dss2cX5nbNMyH6jxK6p-NjuMtrkF_KXtQCLcB/s72-c/MIUI-8-Second-Space.jpg
ri-Techno
https://www.ri-techno.com/2016/11/what-is-how-to-use-second-space-miui-8.html
https://www.ri-techno.com/
https://www.ri-techno.com/
https://www.ri-techno.com/2016/11/what-is-how-to-use-second-space-miui-8.html
true
8051170434734761451
UTF-8
Loaded All Posts Not found any posts VIEW ALL Readmore Reply Cancel reply Delete By Home PAGES POSTS View All RECOMMENDED FOR YOU LABEL ARCHIVE SEARCH ALL POSTS Not found any post match with your request Back Home Sunday Monday Tuesday Wednesday Thursday Friday Saturday Sun Mon Tue Wed Thu Fri Sat January February March April May June July August September October November December Jan Feb Mar Apr May Jun Jul Aug Sep Oct Nov Dec just now 1 minute ago $$1$$ minutes ago 1 hour ago $$1$$ hours ago Yesterday $$1$$ days ago $$1$$ weeks ago more than 5 weeks ago Followers Follow THIS PREMIUM CONTENT IS LOCKED STEP 1: Share to a social network STEP 2: Click the link on your social network Copy All Code Select All Code All codes were copied to your clipboard Can not copy the codes / texts, please press [CTRL]+[C] (or CMD+C with Mac) to copy Table of Content