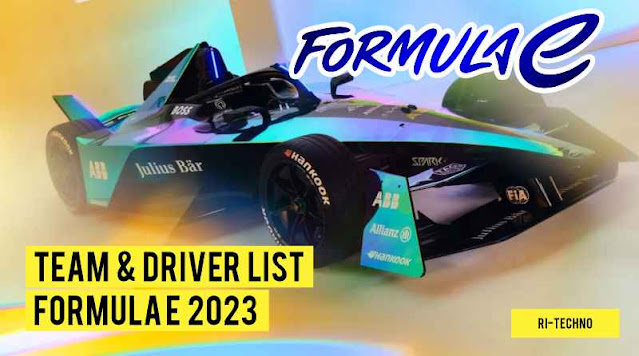 The following is a complete list of Formula E Season 9 2023 teams and drivers. This year's driver transfers set a record with the most driver moves, only the Jaguar team maintained its driver list from season 8 to season 9.

This season the Mercedes EQ team is no longer participating but there is a new team, namely the NEOM McLaren team which is making its debut this season. In addition to many drivers changing teams, there are also rookies like Jake Hughes who will try electric car racing for the first time.

After Nyck de Vries managed to secure an F1 seat, Stoffel Vandoorne was left to move to DS Penske. In addition, this season there is no Antonio Giovinazzi on the list of drivers, he will most likely race in the Hypercar class.

Even though the Mercedes EQ team is no longer there, it doesn't mean that the former racers won't get race seats anymore. In fact, Stoffel Vandoorne was signed by DS Penske and even Nyck de Vries joined the Alpha Tauri team in Formula 1.

Even though this season is the season with the most number of driver changes, the fact is that most of the drivers are still Formula E drivers for other teams. So you should know most of these drivers from previous seasons.

There have been many changes in Formula E this year, such as the latest generation of cars (Gen 3), which are lighter and faster, and many regulations have been revamped to make the race more entertaining and more competitive.

Starting in season 9 the Fanboost system is abolished, it seems that the system which provides benefits to drivers who have many fans is considered no longer in line with the mission of Formula E. Or maybe many have criticized it so that it is better to be eliminated even though it actually gives a different color to the competition.

Are there mandatory pit stops?

Yes! So true. Starting from season 9 or 2023, Formula E racing has a mandatory pit stop system like in Formula 1. The difference is that Formula E will not get new tires, but will get an additional battery when entering the pits.

And this pit stop is mandatory for all drivers and will get a penalty if you don't do it, like the regulations in Formula 1 races.

We hope that this article on the complete list of Formula E season 9 2023 teams and drivers will be useful. If you have questions, please save them in the comments column below as usual. Remain a wise user.