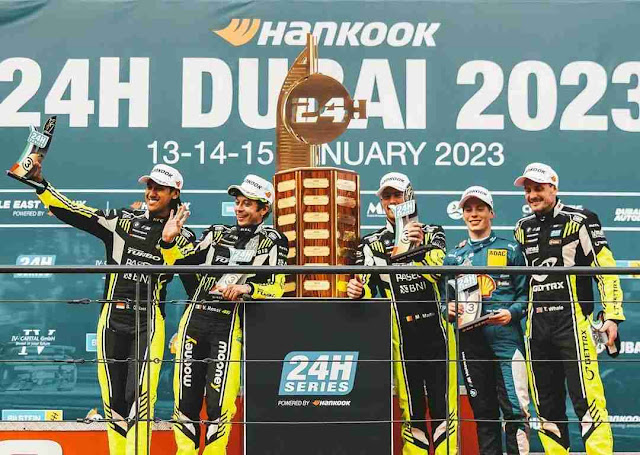 Starting from 8th position, Valentino Rossi, Sean Gelael, et al managed to finish in 3rd position and are entitled to the podium at the 24H of Dubai 2023 race. The race which lasted 24 hours non-stop was held at Dubai Autodrome on 14-15 January 2023.

Valentino Rossi, Sean Gelael, and 3 other racers joined and raced for the WRT (W Racing Team) team using the BMW M4 GT3 2022 with car number 46. They managed to finish in 3rd position and were entitled to receive a trophy on the podium.

Start from 8th position and finish in 3rd position (Podium)

Even though they didn't finish as champions, the achievements of Sean, Rossi, and colleagues can be considered fantastic. The WRT 46 team looked consistent and didn't make many mistakes. In the first 2 hours of the race, Sean et al's team managed to climb 3 positions to 5th place.

After that, the team continued to improve their position until finally, they stayed in 3rd position until the end of the race. Sean and his colleagues looked very consistent in the race, as seen from the lap time data provided by the organizers.

Even though the drivers in WRT 46 are not the fastest racers, their consistency in each lap greatly influences the final result. Little by little they managed to close the distance with the cars in front.

During the race in the night session, the WRT 46 car had a problem on the track, luckily the WRT team who was in the pits at that time was able to fix it and finally was able to continue the race and maintain 3rd position.

Actually, if the above problems did not occur, the WRT46 team could have closed the gap with the car in the 2nd position. However, because of this problem, the distance from the 2nd position became farther and at the end of the race the distance between the 3rd and 2nd positions was recorded to be 4 minutes more.

That time was arguably better where previously Sean and Rossi's team had been left behind for up to 6 minutes at the end of the race.

Even though the race is very long, 24 hours, 1st and 2nd place until the end of the race are only 30 seconds apart. Previously, the two cars were only 9 seconds apart in the final 30 minutes of the race.

After the chase action in the final hours, the car that was in first position (number 91) from the Herberth Motorsports team had to return to the pits and finally was easily overtaken by the car with number 7 from the WRT team.

During the daytime race, there were also several incidents, including a car having problems and spilling oil in one of the corners, causing other cars to skid and leave the track.

KFC and Mcdonald's sponsors are in the spotlight

There is something for the race this time, namely in the sponsors. As we know, Sean Gelael always carries the KFC sponsor brand on every team he joins. However, the presence of the Mcdonald's brand sponsor in another WRT team is unique because it seems like there is a fast food restaurant brand war between KFC and Mcdonald's.

The WRT team is certain to be one of the happiest teams because the two teams they fielded managed to get on the podium. WRT 7 won 1st place and WRT 46, which was filled by Valentino Rossi and colleagues, won 3rd place.