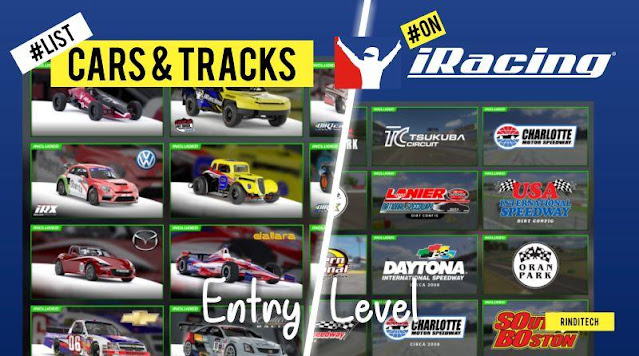 The following is a list of free cars and tracks in iRacing for Beginners (Entry-level). For new players, the game iRacing provides several cars and tracks that can be directly played without having to buy again. Then, what cars will we get if we subscribe to the iRacing game as a beginner? and what circuits or tracks will we get?

What will we get if we buy an iRacing game for the first time? Some of the cars that are often used are Mazda MX-5, Formula Vee, Nascar Truck, VW Beetle, and many more. For famous tracks, there are Daytona International Speedway, Laguna Seca, Oulton Park, and many more. The full list is below.

Although in terms of appearance or graphics it is not too special (especially when compared to the Forza Horizon game), but iRacing is famous for its physics quality that is close to the real world.

The world of sim racing is currently on the rise, this is also in line with the development of the game world in general. Currently, there are many games or games that offer fun in virtual racing, some of which are Assetto Corsa Competizione, rFactor 2, Grand Turismo Sports, and many more.

However, from all the current list of racing simulation games, the name iRacing is still the 'top of mind' when asked about simulation games for racing, including professional racers in the real world.

Also read: How Much an iRacing Game Prices for Beginners? on the Official Store and Steam

In addition, the quality of the tracks used has also used the laser scan method, where every detail of a track in the real world can be recorded and converted into a game so that starting from the texture of the road, elevation and other tracks details can also be felt in the game.

Not only tracks, but all cars in the iRacing game are also reportedly made using the laser scan method. Where else - again the details of the car become very important, which also affects the reaction of the car when driving.

Although there may still be shortcomings, this game is considered the closest game in terms of physics and detail, where the feeling of driving (feeling) in the game is not much different from the real world.

Also read: How to Move Steam Games to Another Drive Without Reinstalling

The following is a complete list of what cars we will get if we subscribe to iRacing as a beginner or basic package (entry-level). This list may change in the future but for now, this is a complete list that I got from the official iRacing website page.

The complete list of CARS that will be obtained in the iRacing starter package:

Complete list of Tracks that will be obtained in the iRacing starter package:

Therefore, this iRacing game is also a game that is quite expensive, especially if you want to use a car or tracks that is not included in the basic package. Some people can even spend up to hundreds of dollars on their first purchase generally because they all bought quite a lot of cars and circuits that were not included in the starter package.

The following are some of the prices for iRacing that we got from the official website. For certain moments this price can be cheaper because there are special discounts or promotional coupons.

In addition to the list of cars and tracks above, we can also buy additional cars and tracks if you want to use them. In general, iRacing retails for a single car at $11.95 and a track costs $11.95 and $14.95 (depending on the type of track).

Unlike the game subscription system, the car and track products in iRacing are one-time fees or one-time purchases. So if you buy a car or a track, then you will still be able to play it as long as your iRacing package/subscription is active.

So for example, you buy a Mercedes-AMG F1 W12 car at iRacing in January 2022, then your iRacing package ends in February 2022. If you reactivate the iRacing subscription on the same account in November 2022, the Formula 1 car will still exist and can continue to be used.

iRacing also offers a discount system if you buy a certain number of cars or track, the discount starts from 10% to 30%. For details, please go to the iRacing website page.

I hope this information on the list of free cars and tracks on iRacing for beginners is useful. If you have any questions, please save them in the comments column as usual. Keep being a wise user! #beWiseUser!