Origins of Lewis Hamilton's "Hammertime" on Team Radio - The Story 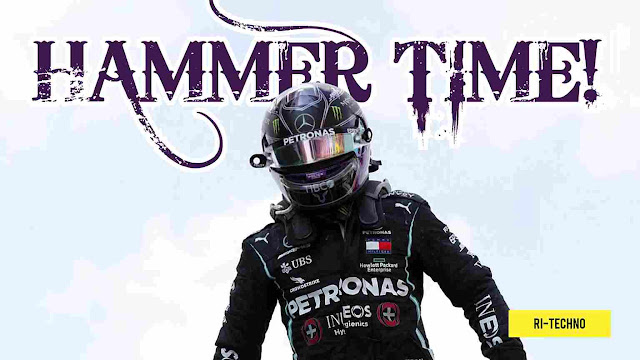 Formula 1 fans, especially Lewis Hamilton fans, of course, are very familiar with the term "Hammer time". This term is often used by the radio team to give instructions to Lewis Hamilton to unleash all the potential that exists in the car.

Then where did the term "Hammer Time" come from from the Lewis Hamilton Radio Team? Take advantage of this term inspired by a song performed by MC Hammer in 1990 with the title "U Can't Touch This" in the song there are lyrics "hammer time!".

Plus Lewis Hamilton's three syllables in F1 racing are "HAM" so the term Hammer time can also be interpreted as "Hamilton time".

Peter Bonnington (Bono), Lewis Hamilton's race engineer, recently reused the term Hammer time during a US GP race. When Mercedes dominated, this term was always heard in almost every race but nowadays the term is rarely heard.

Lewis Hamilton's use of the term hammer time originated from the hustle and bustle of the racer when he was required to push his car faster (It's time to push!). Lewis was confused at the time because he had already done it before he was told to.

"There was one time where he (Bono) instructed "now it's time to push," I was so confused at that time because I had done it before the instruction, I replied "dude, I already pushed!" -Lewis Hamilton

This is very understandable because in every race the racers certainly try to be fast in every lap. But there are times when they can't use the fastest engine setting (engine mix), or they can't use all the available batteries. At some times they also have to keep the tires from quickly "bald" until the end of the race.

After discussing, Lewis finally understood the details and intent of the instructions. Bono wants him to use all the capabilities that come with the phone, including battery, ban, engine mix, etc. All of that is intended so that the car can get the maximum lap time.

I finally said to Bono, if you want me to go all out, use all the elements in the car, just say "It's hammer time". -Lewis Hamilton

From then on, Bono often used the term Hammer time on the radio team when they wanted Lewis to go as fast as he could.

In some radio situations, "Okay Lewis, It's Hammer Time!" could make the opposing team panic because after the radio team Lewis confirmed "crazy" with his car.

Lewis Hamilton's Hammer time moment is usually used when approaching the pit stop time (changing tires), or when they want to increase the gap with the drivers behind them or reduce the distance with the drivers in front of them.

The "pit-stop window" or the time span in which the drivers change tires is a very crucial time, this is also related to the strategy of each driver. If the pit stop strategy is successful, it is not uncommon for drivers to be able to overtake the racers in front of them without having to pass them on the track.

The term hammer time is also often used when Lewis is leading a race, this is done to keep his distance or away from the racers behind him. And there are many more scenarios - scenarios where Lewis Hamilton gets a radio instruction "Okay Lewis, Hammer time!"

The Bono-Lewis duet in the radio team is very iconic and also produces many achievements. The 7-time championship title that Lewis Hamilton won was also inseparable from the role of Peter Bonnington as his race engineer.

Bono - Lewis the most successful duo in Formula 1?

Likewise with the role of Bono (Hamilton's race engineer's nickname) in Lewis Hamilton's success on the track. Having a team that takes care of strategy and provides accurate information, Hamilton will definitely feel helped, and that way he only needs to focus on racing.

The duet of Bono and Hamilton is one of the most successful duets or partnerships in F1. All the world titles that Lewis Hamilton won were inseparable from the role of race engineer, Peter Bonnington.