This Esports Team Cheats and Wins at Virtual Daytona 24h 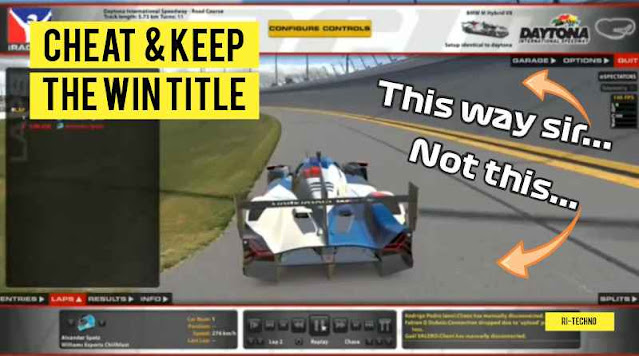 Yup, lately the world of sim racing seems to be getting a lot of upsetting news. Not long ago there was cheating in the F1 22 league, now there is an Esports team that cheated at Virtual Daytona 24h 2023 and won.

The Williams Esports team is currently receiving bad press. One of the Williams Esports drivers, Alexander Spetz, allegedly took advantage of the penalty system in the iRacing game which allowed him to take the apron or inside lane (shoulder) on the Daytona International Speedway circuit.

Alexander Spetz used the apron when qualifying for the highest group at the Virtual Daytona 24h event. Of course, this strategy made him the fastest, and get the first position (pole position) in the qualifying session.

As we know, the Daytona circuit is famous for its banking or oblique turns. Banking lanes in a circuit make it easier for cars to turn at high speeds. But it seems that Alexander Spetz (and the Williams Esports team) prefer flat shoulders rather than banking corners.

As shown above, Alexander Spetz is seen using the shoulder road which is on the inside line at the Daytona circuit during the qualifying session. In theory, the inside line will indeed provide a faster time than the outside line.

However, the inside track at the Daytona circuit is made specifically for cars in an emergency, not as the race track. Even in regulations, this innermost lane is not considered a racing track.

During a race or qualifying session, when our car is damaged, such as hitting a barrier, puncture, running out of gas, etc. Drivers are required to take the shoulder lane so as not to hinder other drivers who are racing on the racing lane.

Weaknesses of the iRacing system

In addition to the participants being "too creative" to the detriment of others, the developer or organizer also needs to be held accountable. Because even though the apron is only for emergencies, drivers who use the lane to cut time, are not given a warning or penalty.

We try to grow SIM racing, we work hard to get a reputation, and then this. And that's why some of these kids will never succeed in real race life. You do that on a real qualy for the biggest event of the year and you are out of the paddock the moment you park your car - @TonyKanaan, Daytona Champion 24hr 2015 (via. Twitter)

When given a response by the former Daytona 20h Champion, the Williams Esports team was "defensive" and bought the driver who was considered to take advantage of the opportunity.

I understand the point and frustration but as an esports team we have obligations to win races for the partners and brands that invest in us. If the game allows it we take it, or we get outplayed by those who do it to us. Really the game needs to be stricter. - Seb Hawkins, Williams Esports Manager (via. Twitter)

*This comment was deleted following the latest statement from Williams Esports

From the response above, it can be seen that the manager of Williams Esports supports their drivers who use the apron in qualifying. 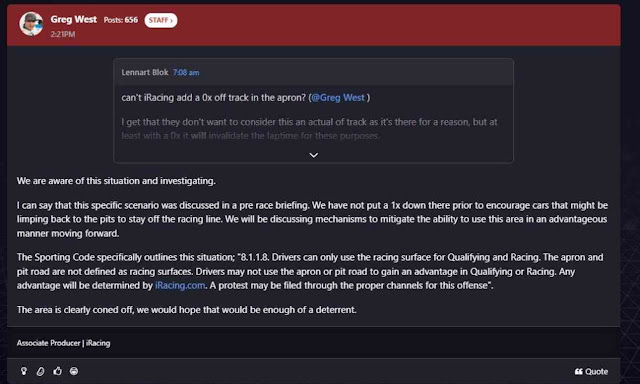 Even though one of the drivers has been proven to have violated the rules, the 1st place title in Virtual Daytona 24h 2023 still belongs to Williams Esports, wow...

From the developing information, Alexander Spetz's account has been temporarily banned by iRacing. with this information, it is clear and confirmed that Alxander Spetz has violated the regulations or 'sporting code' in the iRacing, especially in the Daytona International Speedway circuit.

Jenson Button does not agree to an account ban

Why should he get a ban for pushing the boundaries of the game? His lap should be disallowed in qualifying but not banned. In the real world if you cut a corner to gain an advantage your lap gets deleted, end of - Jenson Button (Former F1 World Champion, Williams Racing Ambassador)

The former Formula 1 world champion, and also the brand ambassador of Williams Racing, Jenson Button, thinks that the temporary account ban is too much. Jenson thinks it's better for his qualifying record to be canceled, not for his account to be frozen.

From the point of view of a former professional driver, maybe Jenson's comments can be used as input, but unfortunately, Jenson is currently also the brand ambassador of Williams, so it is certain that his comments are no longer neutral if the case is related to the team he represents, Williams Racing.

Finally, after days of investigating (themself), on January 27, 2023 Williams Esports made a statement as below.

Following our investigation into the events of the iRacing Daytona 24, we find that the actions of some members of the Williams Esports team breached our standard for acceptable team conduct. We apologise wholeheartedly for that, both to our fellow competitors and to the wider Esports community.

We would additionally like to state that the social media post put out by one of our team members was not authorised nor does it reflect the values of Williams Esports. Those opinions are not reflective of the team position and have since been deleted.

We believe in fair racing and competing to win, but that needs to be with integrity and in the spirit that is part of our DNA. We make a commitment to coach and educate our drivers and team, helping them to balance the demands of intense competition with our values.

It's crucial to have robust and consistent regulation in all sports. Williams Esports, as a key player in the industry, is continuously committed to working with game developers and tournament organisers to ensure consistent enforcement of clear regulations and consequences for breaches. Accountability, integrity and regulation are key to the continued growth and sustainability of sim racing, and of the wider esports industry and we are committed to driving that forward.

That's it, ladies and gentlemen, with that statement Williams Esports agreed with most of the sim racing community that their driver action (and team) on Daytona 24  was wrong. Will they give their trophy from Daytona 24h event away?

With that statement above, Williams Esports seems to tend to keep the winning title on their shelves. Not a single word about the trophy or the race result means that they don't want it included on the table.