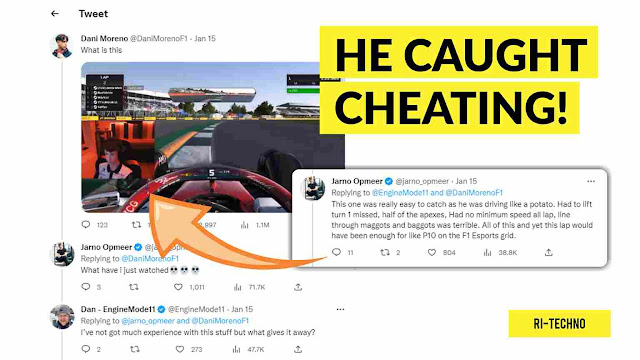 It started with a tweet belonging to Dani Moreno Mercedes F1 Esports) who shared a video of people playing the F1 22 game, which later became a topic of conversation because it turned out that the video showed something that was not natural. An F1 22 player was caught cheating by using a grip hack.

Recently, a player named Jamie Mels was caught cheating while participating in the F1 22 game racing tournament at PSGL. Jamie is strongly suspected of using a grip hack where every vehicle he uses will have a better grip than it should.

This fraud was then confirmed by the Esports team that overshadows Jamie Mels, Campeonato FVR. The FVR team immediately issued a statement that Jamie Mels had been removed from the team and apologized to all those who had been disturbed by this problem.

It is known that Jamie Mels took part in several F1 22 league competitions, one of which was PSGL. While racing at the PSGL event, Jamie raised suspicions while racing at the Silverstone circuit, to be precise in the qualifying session.

During the qualifying session, Jamie did a hot lap and got the first position (pole position), that record time was enough to enter the top 10 in the F1 Esports qualification. However, after an investigation, it turned out that Jamie's time was not reasonable.

This one was really easy to catch as he was driving like a potato. Had to lift turn 1 missed, half of the apexes, Had no minimum speed all laps, line through maggots and baggots was terrible. All of this and yet this lap would have been enough for like P10 on the F1 Esports grid. -Jarno Opmeer (Mercedes F1 Esports Driver)

Later, the PSGL issued a statement that Jamie had been removed from the competition.

After a thorough investigation, the driver below has been removed from our leagues with immediate effect

Jamie Mels made illegal changes to the game files

It's very easy for all players to access game files, even YouTubers often use it to carry out various experiments such as 100% grip, or 0% downforce, etc. Unfortunately, Mels did it for his own benefit and harmed other participants when he entered the race.

Jamie is suspected of using a grip hack or modifying the level of grip of the tires on the road. When other people have to lift the gas pedal or limit throttle input so the car doesn't roll (spin), Jamie can easily hold the gas pedal at 100% full but the car remains stable.

It is with great regret that it has been made clear to us that one of our drivers, Jamie Mels, has been exploiting the game.

Jamie has been removed from our team, and we wholeheartedly apologize to everyone affected by his actions. - Campeonato FVR (@FVRCampeonato)

Is there someone cheating in the F1 Esports competition?

James Dorothy, the owner of the Limitless YouTube channel, said that apart from the Jamie Mels cheating case, there was also what happened behind the scenes of F1 Esports. JD (as James Dorothy is known) said that there were allegations of cheating against one of the drivers in F1 Esports this year.

In the race, the two had exchanged positions several times but the competition had to end because Rasmussen deliberately crashed his car into Ronhaar's car and ended the race faster.

I hope this information is helpful. If you have questions or opinions, please save them in the comments column below as usual. Remain a wise user.