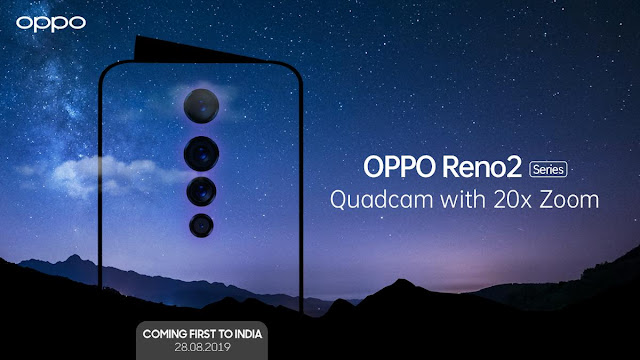 Yes! This information has been officially released by the official OPPO India social media account. 20 times the Zoom means twice that of its predecessor, the Oppo Reno 10x Zoom. As we know the OPPO Reno 2 announcement was officially issued by OPPO India, what about Indonesia?

It seems that just yesterday the Oppo Reno 10x Zoom was introduced by OPPO, precisely in June this year, 2019. And now Oppo has a successor that is no less interesting to introduce Oppo Reno 2 with 20x Zoom !.

That is more or less the contents of the tweet issued by the official OPPO India account on August 16 yesterday. According to an official tweet, the new phone is named Oppo Reno 2. It was launched on August 28 in India, and - besides a selfie wedge camera - offers four rear cameras and a 20x zoom.

It is important to note that Oppo doesn't say anything specifically about the zoom. It is possible that Zomm's 20 times capability is only optical, or digital, or hybrid.

The original Reno has a 5x optical zoom, 10x hybrid zoom, and 60x digital zoom, so it's natural to assume that its successor will have at least that, but we have to wait for a little to get all the details.

Oppo does not reveal other details about this upcoming device. What should be noted, however, is that the announcement says "the Oppo Reno 2 series," which means we might see more than one Reno 2 phone.

Still in the picture or the ability of the camera, OPPO Reno 2 can take pictures in very dark conditions. I don't know what kind of dark, but certainly, it will be very useful for those of you who often take pictures at night or when less lighting.

On the promotion page, OPPO displays the results of this Ultra Dark Mode by showing 3 people who are seen dancing.

OPPO Reno 2 - India being the first

Keep in mind that the OPPO Reno 2 mobile phone was first launched in India, a little strange but not surprising. How about Indonesia?

Indonesia seems to have to wait a little longer because until now Indonesia still seems to be less 'attractive' in the eyes of the world's smartphone manufacturers. Hopefully, in the future Indonesia will also become the axis of the world technology market.

Almost all smartphone manufacturers are trying hard to get a part of the huge Indian market. Seen from the number recently they have launched a phone with new and innovative features in India first.

Apart from OPPO, Xiaomi also has one of the first smartphones to be launched in India, with the first 64-megapixel cell phone from Xiaomi, which will debut in the fourth quarter of 2019.

What do you think of the new smartphone OPPO Reno 2 with 20x Zoom? Of course, adding to the choice yes for those who are looking for a new cellphone. Stay a wise user! #beWiseUser!

More Articles from ri-techno.com:
Porsche Taycan Turbo - Electric Car Competitor for Tesla
Realme XT Specifications Advantage and Disadvantage
iPhone 11 Pro - Apple Focus on the Camera and Screen
Recap Apple Special Event September 2019
Samsung Galaxy Watch Active 2 Under Armor Edition
How to enter BIOS without restart the computer
Acer Predator Helios 700 with Keyboard Slide and RTX 2080
Samsung Galaxy Note 10, There is a Gradient Color!
Review Xiaomi Notebook Mi Air 13 Full Specifications
Under Display Camera - The Real Future Technology
How to Safely Eject/Remove Flashdisk OTG on Android Phone
Sony Xperia 10 Plus - Cinematic Video with Perfect Ratio
How to Easily Record your Desktop Screen with its Audio
How to Open Telegram Account on your Desktop /PC
How to Use Split Screen on Your Xiaomi Phone
How to Watch Movie with Subtitle Text Translate on Your Phone
How to Make Bold, Italic, Strikethrough on WhatsApp Chat (Even Combination)